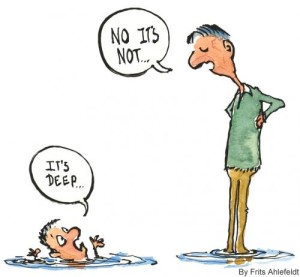 Often we mistake our perspective for truth and full knowledge.

All those people looking down from their windows were looking at the initial assault from different perspectives. None of them were on the ground. From way up there, you couldn’t see the knife. So what you would see from a window looked like a domestic.

The problem is most people never do that. They only look at it from one perspective and mistake that for ‘the truth’
***

Using the analogy of looking at it from different buildings and perspectives helps us understand why this subject is so often such an emotional and intellectual circle jerk. Down on the ‘street level’ an action happened. It’s not good or bad. It is what it is.

It only starts to become good or bad as we add layers to it. Judgements become like the different floors of different buildings. The more judgements you add, the more floors you ad AND the more specific the building (perspective).

This is where we run into problems. One example would be when someone says “I know what I saw!” Well using Kitty G as an example, people didn’t look out their window until they heard the ruckus. Then most thought they saw a man and a woman arguing. Not something worth calling the police or interfering. Where as others did respond as one would do to a domestic. Not knowing it was a murder in progress because of distance, darkness and not a clear view.

Another example comes from being told about a violent incident. (And you will be betting your ass on this effect when it comes to juries in a self-defense case). But guy in apartment 5C is telling them what happened who heard it from the woman who lives in 5A — who claims to have seen it happen.

Way too much of what people think they know about violence in general and a specific incident is way more like a gossip-fest going on among people who share the same views.

When the subject is violence against women, you are starting out 10 floors up on a VERY judgmental building. And a lot of folks are agoraphobic about leaving their apartments.