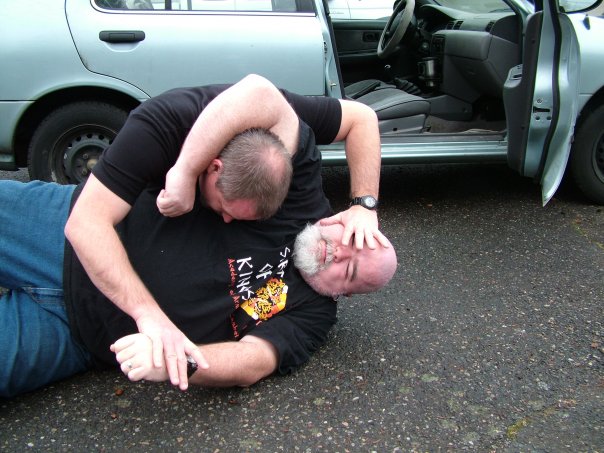 The One-Step is the primary drill in most of my training. there are more, of course, and like any drills it has its flaws. No one goes to the hospital, so something about it is not right.

A few posts back on my blog, things are getting a little heated up. That’s fine. everyone is making points and I’m learning a lot. But the one step is coming into it and the two people are talking past each other and that is largely my fault.

It feels unnatural to go slow and limit yourself to one action. It really does. But if you are doing two or three actions to my one, what do you think I am doing? If you parry and side step and counter to my simple punch, in what mythical world do you have time for that before I pile on a second or third or even fourth punch?

Steve was right. The seminars are not about martial arts. They are about violence.

In most of them, so far, someone has stated that his block and counter should be counted as one motion, since he has trained it to reflex and that is what he will do under stress. So I take someone to the middle of the room (usually not the person– if they are too arrogant to listen, their ego is usually to fragile to handle the demonstration. I do want them to see it.)

I take the subject to the center of the room (and I am careful– it is always one of the most skilled there. To do this safely I need someone with excellent breakfalls who will not panic.) I then take him out. A fast flurry of face strikes, a takedown and the flurry continues on the ground.

All freeze. No one, so far, has even moved or offered any resistance. A few tried after they were down and I had relented. A few said afterwards what they thought about doing. No one moved.

It has little to do with the teacher student dynamic. That’s there, undeniably. But the freeze comes from the OODA loop disruption. The strikes coming at the face are not damage– I never actually contact– they are information. Too much information too fast. It is paralyzing and it is doubly paralyzing if damage accompanies the strikes.

For that moment, in a class, with someone not hurting him or her at all, the expert martial artist is completely helpless.

Then I give the speech. That this is not about fighting. This is not about martial arts. This is about violence. If you dream, for even a second, that you can block and strike or do more than one thing to answer a flurry, you are dreaming. You do not know the difference between an attack and a feed. The feeds you have trained on over the years are like fairy tales. there are some good lessons in them, and they are entertaining… but they are fairy tales.

If you have made your block and counter or your trapping work against a flurry, it wasn’t a flurry. Flat out, it was a feed.

If you want to stop someone who is intent on injuring you and he started first, you have to move with maximum efficiency. You have to make each action serve all of your goals: protect yourself,damage the threat, better your position, worsen his. Each move. Every time.

If you separate the pieces, you will be even slower. From the moment of assault, you need to be integrated. No hands and feet moving together. No blocking separate from striking…and not because the actions don’t work (all though they will be suicidally slow if separated) but because the thought process is too slow.

One of the very basic uses of the one-step is to instill this value: what is the absolute most efficient thing that I can do in this second under this circumstance? That drives everything else.