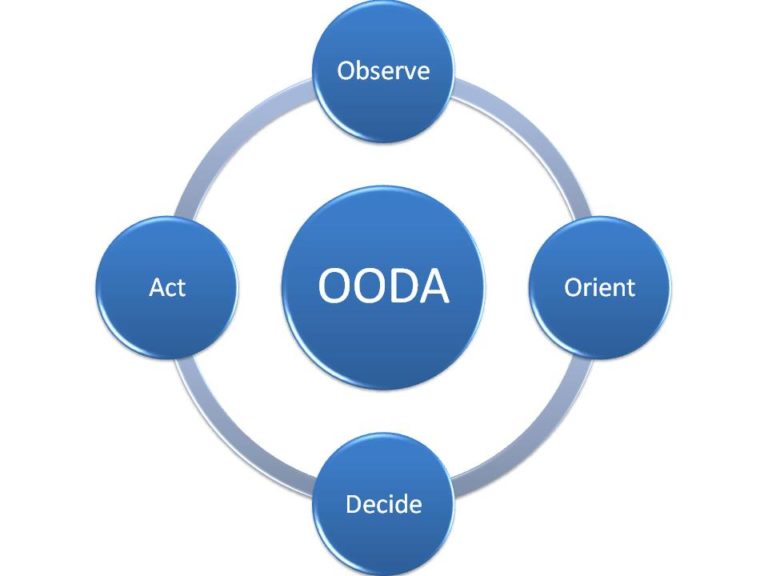 Just read a really terrible book purporting to be about safety. Ignorant, repetitive and pseudo-profound. According to the back cover, the guy had a resume that sounded like a god, but there were basic words used incorrectly, over half the book was word-for-word repeats of the author’s talking points. And some of the advice…. whew. Worried about freezing, fear or stressed-induced bad decisions? “Simply” divorce yourself from emotion. No idea why I never thought of that…

Anyway, pissy rant over. He had a lot of emphasis on a weirdly misunderstood version of Boyd’s OODA loop, and it reminded me of a long ago conversation with Maija (Maija of The Liar, the Cheat and the Thief fame). The conversation was about using the OODA loop as a framework to explore and teach personal safety and some other things. The conversation was almost forgotten and the bones had never somehow got written down. So here goes, and let’s see if I can make it make sense.

O is for observe. On your end— see and sense as much as you can. When static, try to be in places that maximize your vision—elevation, looking from small apertures through big apertures, position to take advantage of reflections and shadows. And use all of your senses. Practice consciously listening, smelling, feeling the wind and temperature changes. Vibrations through the floor. Learn to sense not only things, but significant negatives. Like when the crickets stop chirping or the target stops snoring or the steam is not rising from the coffee cup.

The reversal: These are the same things you want to deny others. Minimize your visibility. Watch from camouflaged places. Looking from small through big apertures puts the threat in the position of doing the opposite. Remember that stalking in the wild is about not being seen (heard, smelled) but stalking in an urban setting is about not being noticed. Blend. You want to observe the world, but to maximize your freedom of action, you want to be unobserved.

O is for Orient. Doesn’t matter what you see if you can’t figure it out. On your end, this is about studying people. How they move, think and act. In groups and alone. Musashi’s advice about know the way of all arts. understanding how taxi drivers, construction workers, criminal, doctors, lawyers, etc see the world. It is a constant process of learning. Take a good tracking class and an entire world of perception and understanding opens up. Riff off the elements of that tracking class and you can learn to see the emotional tracks left by certain events.

And denying this is a skill as well, and there are at least three ways to ruin someone else’s orient stage.
You can simply deny them information. Non descript clothes. Lack of facial expression. Basically, no obvious hooks.
Or you can confuse the threat by offering contradictory information. Long ago when the first crop of entrepreneurs started wearing tennis shoes with their business suits, there were news articles trying to figure out what it meant. You can have your words and actions diametrically opposed. You can wear a RTKBA t-shirt with fuzzy bunny slippers.

Or you can take absolute control of the Orient process and supply a convenient pigeonhole. One friend has long frizzy hair and wears tie-dye and a kilt. He’s immediately dismissed as a harmless burned-out old hippy. I can wear the tweed jacket with leather elbow pages and copper-rimmed glasses and be immediately dismissed as a harmless academic. Or I can put on my middle-aged tourist costume. If you’re so big and imposing you will be noticed, adopt the body language of the big, goofy, harmless guy. JA is amazing at that.

D is for Decide. You want to maximize your decision speed, which means minimize your hesitations. Comfort level with your physical skills is one of the keys, of course. But I also find a clear order of priorities to be useful. I know what is worth getting involved in and what isn’t; what I will and won’t tolerate. Truly understanding what is important speeds up your reaction time.

Also, courage. Courage can be tough to define beyond ‘acting despite fear’ but I mean a special kind. I mean the confidence to know that you can and will recover from fuck-ups. We all make mistakes all the time. When you are afraid of mistakes or the consequences of those mistakes, you hesitate. When you deeply believe that you can and will recover, making mistakes is less a thing to be feared and thus not worth hesitating over.

To prevent others from deciding can be a long-term or short-term route. Long term, if you have the right relationship, you can induce learned helplessness either globally or in a particular field. When someone gets punished no matter what they do, the only intelligent strategy is to do nothing. That induced passivity is called “Learned Helplessness.”

Short term, most of the ways to prevent decision involve adding more information to the equation. Very few people are disciplined enough to make a timely decision when there is a possibility of critical information on the way. So most of the short-term methods for paralysis involve manipulating one of the Os, Observe or Orient. All of your actions are information (Observation) so purposeful movement prevents decision. If your purposeful movement is hard to read, (“What is he doing with that cat?”) the threat can’t access the Decide stage until the question is resolved (Orient.)

Recognition of available time (what Gordon Graham calls “Discretionary time”) is a secondary skill that plays a powerful part in the O/D stages. When people envision applying Boyd’s work, they often focus on speeding up the loop, “getting inside the opponent’s loop.” Sometimes recognizing that there is no immediate need to act is a super-power. While others are frantically trying to respond, you can gather information and resources and make a better plan. Often, if your calmness is hard to read, it will invoke rash action in the threat. Always let your enemies make mistakes if they are inclined to do so.

A is for Act. Part of this is possibility for action. Whenever possible, place yourself for maximum options and freedom of movement— have multiple escape routes, see that none of your limbs or weapons are hindered. There’s no point in having a weapon you can’t access. At closer range, this is the kind of stuff we play with InFighting. In order to deliver a strike, you need power, a target and a weapon, but you also need empty space to move the weapon through. This can range from managing the voids infighting to creating empty space to exploit while grappling.

Another part of Act is having a physical skill to apply. It doesn’t matter how well you can OO or D if you don’t have the necessary skills to execute your decision. And it’s not just skills, it’s comfort level with skills. Knowing how to do something because you’ve read about it or watched videos helps if and only if the situation gives you enough time to move from the cognitive to the physical plane. Reading about how to make a shelter can work, because hypothermia can take hours to kill you. Watching videos of knife defenses, on the other hand, is almost if not completely useless. Physical skills must not just be practiced, but played with. It’s the only way to cross that gap into adaptability and access under pressure.

Note- Operant conditioning can skip the two middle steps of the OODA loop entirely, but conditioning correctly is pretty stringent and it only works on very simple responses to relatively clear-cut situations.

Efficient action hinges on having a broad range of applicable skills that you have tested. Ideally skills you have tested to the extent that your lizard, monkey and human brains all trust the skills.

It doesn’t hurt to make a habit of decisive action, either.
The reversal. You can deny the opponent’s ability to act by controlling his avenues of movement, filling the space either he or his attacks must move through, by physically disrupting his ability to act (injury, handcuffing, etc.) by disrupting his base mentally or physically, by blocking his access to resources (tools, funds, people, advice, information…)
Overall, maximize your adaptability (skills, awareness) and resources. Minimize your opponent’s.