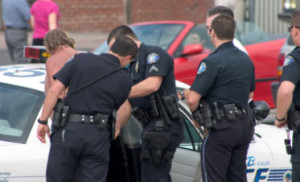 Violence is a visceral thing and people tend to respond to it emotionally. There is always an emotional element to an act of force. Simultaneously, people assume a moral aspect to an act of force. One person is assumed to be the good guy, one assumed to be the bad guy. Combined, these make a powerful gut reaction and people tend to look at a force incident through a moral and emotional lens that is almost completely irrational.

I am going to try to explain and explore some basic but uncomfortable truths in this artitle.

In my opinion and experience, people with mental health issues are not more criminal than those without. They are far more likely to be victimized than to be the bad guy. But they are less predictable, and that increases the fear in other people. In mental illness, the person may see the world differently (e.g. hallucinations) and/or may process the world differently (attributing other people’s motivations to conspiracies or spiritual forces; or seeing personal connections that don’t exist.)

When thinking of justice, motive matters. Force is always tied up with ethics, and every rational person only wants force used on bad people. Using force to stop a murderer or rapist is moral. Rapists are bad. Murderers are bad. People with screwed up brain chemistry aren’t bad. We don’t want force used on people who aren’t bad…

That is the source of the disconnect. This is where the moral aspect of the lens confuses people and influences them to write bad policy and to scream against good decisions. “Rapists and murderers are bad, mentally ill people are not” is a completely irrelevant metric. It is not the people, not the rapists nor the murderers that are bad, not in the moment at least. Rape is bad. Murder is bad. Force is used by police officers to stop behavior. The motivation behind that behavior is irrelevant.

For justice, when the courts and the mental health experts have time to find the facts and discern underlying causes, motivation is a big part of determining right or wrong. When it comes to treatment or rehabilitation*, motivation is critical in changing long-term behavioral patterns. But if someone is swinging a hammer at a baby the person needs to be stopped before he or she finishes the hammer swing and motive doesn’t matter at all

Force is used to stop behavior. Force is used to prevent bad outcomes. Those bad outcomes must be stopped regardless of the motivation behind them. If you are going to take my baby, I will stop you. It doesn’t matter whether you are trying to kill my baby to get back for some generational vendetta between our grandfathers or because you think you will get ransom or because you believe my baby has been possessed and must be destroyed to save the world. My choices are the same no matter your motivation.

Screwed-up brain chemistry versus evil intent does not affect my options at all. Motivation is irrelevant and as such, this is a problem completely separated from the concept of “justice.” The only thing that affect my choices are;

how hard you will be to stop

how much time I have to stop

If I have all the time in the world, I will try to talk you down. Doesn’t matter if you are an old enemy or having a psychotic break. If you are in the act of swinging a hammer at the baby, I will shoot you, regardless of your motivation. And if you are small and weak and untrained and unarmed and close enough that I can protect the baby just by pushing you away, I will do that. And if you are big and strong and skilled, I may have to hit you in the back of the head with a brick. None of this is influenced by your emotion or your mental state.

But because we want force tied with justice, many people want a completely different suite of options to use on the mentally ill.

If that hypothetical suite of options, with a lower level of force and ideal outcomes existed, guess what? We’d use them on everybody. Not just the mentally ill. Not just people in altered states. Everybody. Because officers are taught to use the lowest level of force that will safely work.

And since it would be used on everybody, my fear is that advocates would then scream for a special lower level of force to be used when the subject was mentally ill, because they can’t outgrow the idea that force should be tied with motivation. They can’t recognize the irrelevance of their justice filters.

Policies that require officers to deal differently with mentally ill or emotionally disturbed persons rather than “regular” bad guys are impractical. Even a trained and experienced clinical psychologist can’t tell the difference between schizophrenia and LSD at a glance; or meth and the manic stage of bi-polar, or suicidal ideation brought on by depressant chemicals versus natural brain chemistry. Expecting a cop to figure it out in a fraction of a second with bad lighting and a huge number of other distractions and concerns (no clinician has to make the diagnosis in busy traffic or with an audience of hundreds, some of whom are potential threats and/or victims) is ludicrous. It is setting an impossible standard that will get more people hurt, not fewer.

As a rule, advocates from the psych professions who say that all it takes is a little training and officers could talk down violent EDPs have never dealt with someone who wasn’t at least stable enough to get to the office. Officers deal with people ranging from the mildly upset to full-blown Excited Delirium; people charging into traffic or chewing up and spitting out their own tongue. Some who are pre-verbal and can’t seem to process words at all.

Physically and verbally, some people in altered mental states are much harder to deal with than criminals. Verbally, some don’t process words at all. Some do not know or remember how to surrender. Many will not recognize an officer tackling them as an attempt to save their lives. Physically, many of the lower level force options fail with EDPs. Pain compliance, a very low level of force frequently fails. In my experience, it is not because they don’t feel the pain, but because they do not understand that the pain is part of a bargain, and the pain stops when the resistance stops. Another low level force option, simply using mass to tire the threat (‘threat’ is the law enforcement euphemism for someone requiring force) often fails. Some people, especially on the excited delirium end of the spectrum, will fight until their heart fails.

This point ties into point 3. High levels of force are rarely required on experienced criminals. An experienced criminal knows how to play the game, knows how to surrender and when to do so. Neurotypical people without extensive criminal histories, if they resist, tend to require more force because they don’t know the rules, they think fighting is like they see on television. The mentally ill and emotionally disturbed, with a combination of naivety and the fact that low levels often fail frequently require extreme levels of force to control. The amount of force necessary to control a person is often inversely proportional to how we would do it if justice or motivation was a factor.

All uses of force look shocking to the uninitiated. In many cases, the force that looks most shocking actually involve very low levels. Using a mass of officers to hold down a single struggling subject is a tactic designed to cause minimum injury. With four officers, you can attempt to have one merely hold each limb until the subject gets tired. A lone officer in a similar situation would likely have to use a baton or a gun. But the social media reaction is often, “Why did it take four officers to beat down one poor, unarmed, mentally disturbed child?” It took four officers because they were trying so hard, at extra risk to themselves, to not injure the threat.

Because the uses of force look shocking and because officers work in a political environment where public outrage fueled by ignorance can change their policies, people can feel good about demanding change that in the end endanger the very lives they intended to protect. In the eighties, after a few incidents of death following the application of choke holds** many agencies banned the use of vascular restraints or reclassified them as deadly force. This removed the one tool most likely to control an EDP with minimal injury. Tasers(tm) are incredibly painful, and they are new and scary and electric and a “weapon” and so people agitate to have them banned or restricted extremely, even though they cause pain with very minimal risk of injury. The only tool that does what a Taser(tm) does, which is give a fairly reliable stop at a distance, is a gun. Wanting to ban Tasers(tm) is effectively saying, “I’m more comfortable with blowing holes in people than in causing five seconds of pain.”

Using force on EDPs causes extreme emotional toll on everyone involved. The officers as well have the concept of justice tied to their need to use force. This is why so often a number of officers and a lower level of force is used even when a higher level of force is justified. And when the subject dies anyway— after a long fight when the officers are trying not to use deadly force— the officers have emotional issues. The public and the victim’s family are extremely upset. Everyone wants something done. Wants a better outcome. Wants their irrelevant instinct for justice satisfied.

To sum up, many of our instinctive filters are irrelevant in an emergency situation that requires force. The “solutions” offered often require officers to have supernatural levels of skill and knowledge that simply don’t exist. If a workable solution with less chance of injury existed, it would be applied universally, not just to special cases. And that has and is being done. The Taser, as one example, is an effective tool that decreases the risk of injury to everyone, when it works.

Public outcry stemming from a naive understanding of force endangers everyone.
*Leaving aside for the moment that metastudies show that involuntary rehabilitation is pretty much a myth.

** Setting aside for now that many of the holds were taught and applied incorrectly, which could and should have been addressed as a training issue instead of a policy issue.