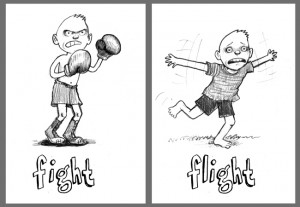 There are three natural strategies for dealing with predators: Hide, run and fight.

There are two more for dealing with your own species: Posture and Submit. Both occasionally work cross species.

The three natural strategies mimic the Freeze-Flight-Fight.  Freezing is natural.  We evolved in a world where predators key on motion.  It is a form of hiding when it is too late to hide.  If something else is moving and you aren’t, the eyes of the predator will be drawn to the something else.  And it works sometimes in social violence.  Often, when someone wants to escalate to physical violence, he or she needs a ‘hook’ a reason to blame you.  Frequently, freezing denies the hook.

Hiding can be an effective strategy.  Many wild birds hide their nests.  Helpless things like eggs and fawns are camouflaged.  There is a definite trainable skill in it.  When it works, the cost is low.  However when it fails, it fails catastrophically.  For that reason I’m uncomfortable with lockdown as the sole response to school shootings.  They call it shooting fish in a barrel for a reason.

Running works too.  It’s very hard to be injured if you’re not there.  It works for herd animals, as long as something else is slower. Predators are lazy.  Or efficient, depending what spin you want to put on it. Turtles are easier to run down than gazelles. And that’s the rub.  No matter how much you pretty it up, running works as a strategy because you are willing to sacrifice one of your own.  When you can’t run, or aren’t willing to run because of who the target will become, you get stuck with freeze or fight.

Fighting– probably 50% of the blog is about that.  It’s an unfortunate word.  People tend to think of the dominance struggle within a group, and that’s more a part of posturing.  It’s not what a caribou should do to a wolf, no more than you should try to box or grapple a tiger.  As a targeted prey, an animal knows that the predator has the advantage– bigger, stronger, with more weapons, probably all of the above.  The fight strategy is an attempt to make you too expensive to be a meal.  It is not something rabbits do because they believe they can beat a coyote

It’s especially an unfortunate choice of words when people attempt to use Monkey Dance defaults in predatory situations.  Again, something I’ve written and talked about until I’m tired of it.

Posturing is generally playing the alpha male or Monkey Dance game.  Trying to look impressive.  Threats.  Sometimes it does work on predators– being loud and making big arm motions sometimes discourages cougars and bears.  And sometimes it doesn’t.  Again, one of the things that when it fails tends to fail catastrophically.  Predators don’t play in the same league or for the same stakes as intra-species rivalry.  When bluffing fails on a creature that has claws and fangs…

Submission, showing the signs of surrender works within species.  It can go very badly when you have been trained that all people are essentially the same and you are trying to surrender to a society that believes anyone not like them is subhuman.  So maybe I should say that it usually works within cultural groups.  Unless you are dealing with someone who wants a reputation for breaking social rules.

Sometimes it works with predators.  There are a few documented instances of playing dead working with bears.  With certain human predators giving them what they want keeps them from using force.  With others, of course, submission gives them a clear signal that it is safe to use force, and they will.

All except fighting tend to work, but fail catastrophically when they fail.
Hide-> Fish in a barrel.
If you try to run and aren’t fast enough, you’ve given up your back.
If your bluff gets called posturing, it will be bad against a predator, even money in social violence.
And submission postures are submission postures because they are difficult to fight from.

You can also get destroyed fighting, but that comes with the territory and if that’s the strategy you picked you should feel somewhat prepared.  The thing with fighting is that when successful it has a higher price than any other successful strategy.  Fewer catastrophic losses, but the only strategy that risks catastrophic wins.

There are two more, one natural and one uniquely human.

Hunting.  Maximizing your advantages to eliminate the target as quickly, safely and efficiently as possible.  With human technology, size, strength and ferocity of the target have little bearing.  Bad guys use this strategy.  It is hard for a good guy to use the strategy, though it is the central tenet of Llap Goch.  But good guys can use the mindset, and there is a lot of power in that.

The last strategy may be exclusively human (maybe not) and can be done in conjunction with any of the others: Gather intel.  If you pay attention you can learn much about your enemies, even while you are hiding (that’s what scouts do, essentially); or running; or fighting (Maija is working on a book on reading and deceiving an opponent in a duel); or submitting (assassin’s favorite?); or posturing.

1. In terms of the 5D’s of Self-Defense – DECIDE- DETER-DISRUPT-DISENGAGE-DEBRIEF