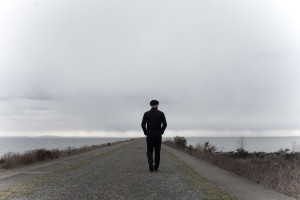 Once upon a time, I’d elected to go into a cell and talk down an extremely agitated inmate, and it wasn’t working. One of the big keys to talking down people in altered mental states (bad drug reactions, stress that makes them temporarily out of control, or truly unstable mental illness doesn’t really matter much) is to lower the adrenaline. Which, since only time dissipates adrenaline, means the golden rule is “Do nothing to increase the subject’s adrenaline.”

And he was not calming down. He kept darting glances over my shoulder, and there was no way I was going to look. You don’t make direct eye contact with excited mentals (it can be read as challenge or threat and adrenaline rises) but you give them full attention (read as respect). And if you glance away at the wrong time you can get badly hurt.

What was going on was that one of the rookies decided to ignore my instructions to stay out of sight. When dealing with potentially bad situations, you want the best back-up you can get, but when talking down an EDP (Emotionally Disturbed Person– you know it’s tactically important because we have a TLA (Three Letter Acronym) for it) if they see the backup they know that you’re scared, and fear is contagious and their adrenaline rises.

So, despite specific instructions to stay out of sight, the kid (who was big enough to be imposing) was hanging right off my shoulder. Why? Because he wanted to see why I was so successful at dealing with EDPs. He wanted to see what I did first-hand.

This is a big teaching quandary for me. And research problem. The best way to learn real skills for high-risk, high-speed problems is to model them. You can learn theory in the classroom and you can practice the motions in the dojo, but real world applications are complex on many levels. Just talking to someone isn’t a mere exchange of words, there are social, emotional, intellectual and status implications of the tiniest interaction. Being with someone who is skilled at handling problems and watching them handle those problems and maybe helping and definitely asking questions later is where the important stuff happens. It’s the safest way for the stuff you learn in class to become a real skill you can apply.

But there are a handful of skills that are hard to model, because the skill is so hard to apply without the emotional protection of privacy. Imagine trying to reassure a mother whose child has just died but start with, “Do you mind if I film this?”

Intersection, here. There are certain things, maybe everything but thinking about it, all the high-risk stuff, where the processing is more important than the event. Something terrible happens to you and it’s terrible… but how you process it, how you come to think about it and understand it will make the difference between an incident you soon forget, one that makes you stronger, or one that continues to victimize you mentally for the rest of your life.

And helping someone process a big event is one of those skills that generally requires some privacy. “Let’s go for a walk” as you wave the other people who want to help back. Absolute best thing for the primary, but as that rookie pointed out long ago, it denies the ability to learn by modeling.

I don’t have a good answer for this one. The best stuff I have for talking people down is in “Talking Them Through.” But teaching the skill, modeling… I don’t have a solution for that. And it’s one of the skills that can be badly bungled– with horrible long-term consequences.