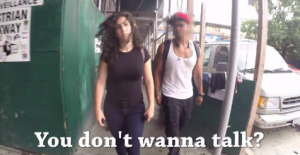 Straight up if you walk past loiterers you’re going to get noise. That’s a fact of life in the streets. What walks past them is entertainment and also a revenue source.

It’s not uncommon for strangers who approach you to want something. So harassment is too strong of a word for most of those interactions. This especially given that the supreme court has upheld panhandling as free speech. Also it’s questionable if many of those people weren’t buskers or business owners trying to get her to come in and spend money.

It’s more likely that women will get ‘pinged’ for other reasons than money. Here’s the thing, street ho’s and junkies will often respond. Because they too want something. So yeah, you get to talk to a woman and all you have to do is give over drugs or money for her attention. That behavior is the opening gambit for conversations at a certain social level. (If you want to be ironic, because of her use of ‘harassment’ you can claim she’s showing racist, white privilege over ethnic and class oppressed people’s expression of free speech and cultural traditions.)

Realistically though, her lack of acknowledgement and reaction is what prompted those two guys to turn into a game of ‘let’s fuck with her.” These extended engagements did qualify as harassment, but they mostly resulted from her strategy of silence and discomfort. If she’d responded appropriately to the circumstances the incidents would have been over in moments. Simply stated, women from that social class shut this kind of shit down, right quick. Partly because they’re willing to stab your ass in a heart beat.

Unfortunately there’s a new — at least in human terms — behavior among city dwellers. I call it an isolation bubble. It’s gotten way worse the advent of portable electronics. The odd thing is it has become the new form of ‘polite’

An isolation bubble is basically you’re off in your own private Idaho looking at your cell phone, listening to music, staring at something and ignoring others. It’s as if we’re all floating along in our own bubble of isolation and we respect each other by not forcing others to notice us. Thing about this new form of politeness is how many people get offended, scared or emotional when this imaginary bubble is popped. HOW DARE YOU MAKE ME NOTICE YOU!!!! Don’t you know that my isolation bubble is sacrosanct?

Middle class and the rich have truly embraced the isolation bubble as a way to move through masses. This especially in urban and suburban environments. Thing is outside those narrow environments, that behavior isn’t polite. It’s either rude, disrespectful or painting a target on your chest.

She’s basically demanding that everyone respect her isolation bubble. And then screaming harassment when they don’t.

The intention of this video is to show that street harassment is a problem for all women at all times. This video doesn’t prove that. But it does prove that street harassment IS a problem for this woman. Clearly, the following is the greatest issue. From the standpoint of Conflict Management, the woman’s strategy of silence and ignoring via the Isolation Bubble doesn’t work in certain situations with certain people.

It is a simple fact of human nature that people don’t like to be ignored. Some people are antagonized by being ignored. Therefore, if you want to be able to co-exist with other human beings, you need to figure out strategy that works otherwise you are doomed to being a victim.