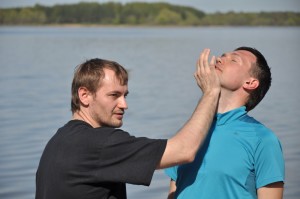 Here is a brief introduction to the differences between street and mat conditions from a Russian perspective. This will translate for most of you too I guess as violence is an international language. So I will highlight  5 main differences that are important if conflict management goes physical and your previous training has all been on the mat.

1st difference of street self-defense from a sport fight

First of all this is the quantity of opponents. You have only one opponent in a sport fight, and usually there are multiple attackers in a street. And the quantity of opponents is the root problem and difference from a sport fight: different techniques, different tactics, different vision, different mental setting (let alone the street extreme situation which is different as well). Try to analyze your style or school – would its tactics and techniques help you to fight the multiple attackers? If not, I’ve got some bad news.

2nd difference of street self-defense from a sport fight

Then we should pay attention to a surface – can you fall on a concrete with no harm to your health? What if you fall down? What if your opponent is a wrestler? Street pavement is usually made of bitumen which is really hard. Try it if you don’t trust. There are no comfortable mats or tatami. Please be honest – could you harmlessly fall down on a hard pavement? Let alone possible glass fragments or rusty cans which are possible even in a wealthy countries. Could you feel comfortable in a ground fight? Could you easily stand up?

Besides if you fall down you would lose direction for a second at least. At that moment you would be a helpless victim. But if you trained you are OK even in the very moment of falling.

The Russian Martial Arts start from this point – at first we learn to fall (frontwards, backwards, leftwards, rightwards and other directions). Then we learn to do rolls, etc.

3rd difference of street self-defense from a sport fight

Do you think that the biggest guy is the most dangerous one? Sorry to disappoint you, but that is not true. Folks pump iron trying to look cool, but a big biceps doesn’t make you to be a great street fighter. Yes, weight matters in a sport fight – that is why they made weight categories, and a big boxer most likely will do a smaller one. But big muscles can be your disadvantage in a street fight. Why? Because they use weapon in a street, dude! And then everything changes – a smaller, but dexterous person has a chance to evade from a knife, while a heavy, bulky person most likely will be cut. Yes, you can punch or even knock-out your opponent, but he will recover, and you might not.

Some martial arts practice taking strikes or kicks – they harden their bodies to stand the pain. This habit, this reflex can be good in a sport fight, but then such a fighter can reflectively do the same block against a steel bar or a knife…

The legendary Cossacks were dexterous, they didn’t use armor. Instead they evaded from enemies swords and spears and could get anybody at the same time. The Cossacks were the warriors nation. Unlike the Russian peasants they didn’t like to take strikes even in a fist fighting, because as we said before it can make a reflex to take anything from your opponent. If a peasant could afford it as he would never go to war in his lifetime (even if he would, he would go as a simple minuteman), then a Cossack warrior couldn’t afford it.

There is a traditional Russian competition when two persons stand close to each other, and they strike each other in turn. They cannot move their position, they should stand at the same place. They should take all the strikes. The winner is the person who lasts longer. Usually they do it with a naked torso, so everyone can see a damage on their bodies. Well, Cossacks would never play this game. Guess, why.

See the difference between a fist fighter and a warrior.

4th difference of street self-defense from a sport fight

Fighting with multiple attackers demands different vision. In sport combats you can concentrate on one opponent only, but in a street fight you need to check several opponents simultaneously. Central vision doesn’t work here. You need to use peripheral vision and the method of defocusing which was described in the previous chapters. That would help you to see the 180° of 360°, but what about other half? Unlike movies enemies try to attack you at once, preferably from the back.

These are not all possible variants of visual checking of a situation, but we cannot talk about it in this book.

5th difference of street self-defense from a sport fight

In a sport fight you use ‘linear’ techniques, tactics, vision again… You have only one opponent and there is an imaginary line between you. But in a street geometry changes. In a street you are in a circle of multiple attackers. And the sport fight techniques and tactics supposed for a single combat doesn’t work here. In a street you better use hooks, backfists, while constantly moving and rotating at the same time. (Yes – movements are also different.) It’s like you make a protective sphere with your arms. You don’t let to grab you, you block punches, you punch yourself.

Any exercise, any technique is good for a particular situation and for a particular person. Medicine for me can be a poison for you. The Russian Martial Arts make a person to think. Guess you already understand that we better think not only about exercises or techniques, but about life situations and clichés as well.