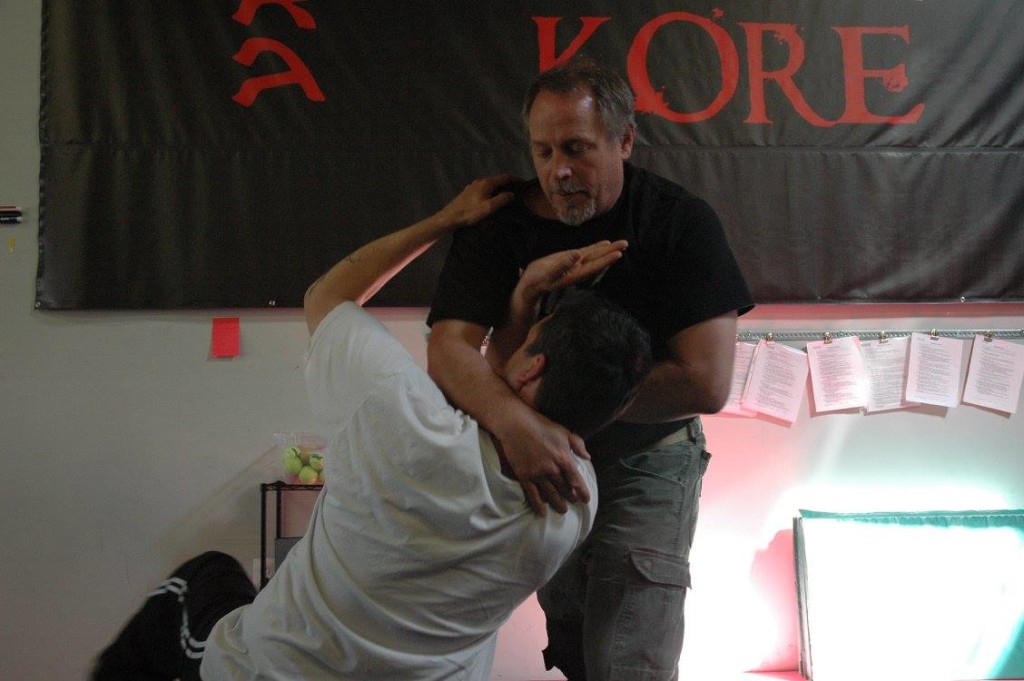 Good playtime with KJ yesterday.  He wanted to work infighting defense against elbows, specifically elbow flurries. Ergo, we both had bloody lips and big smiles before we broke for lunch.

Infighting is not like fighting at striking range.  As I use it, it is also different than the other player’s concept of infighting.  It’s not the range where you can comfortably hit with your elbows.  Infighting, for me, is the range at which our torso’s are in contact range.  Maybe a fistwidth between, at times.

And that has huge implications for how you fight and think– and this is hard for me to write.  Because the range is so close, the speed is high, far too fast even in play to think.  I don’t infight mentally with words or pictures, it is almost all by touch, which makes it very hard to write about.

KJ has a lot of skills, but his default is a striker.  And so he envisions incoming attacks as things that must be intercepted before they reach him.  That is how you fight in space.  But at infighting range, that’s not necessarily true.  None of those attacks are separate from the body and brain controlling them.  The attacks are physically linked.  And it’s not like an octopus, either.  It is bone.  Hand bone to forearm bones to humerus to shoulder girdle to spine (and rib cage) to pelvic girdle to femur to lower leg bones to feet.  All bone, all connected.  And every one of those bones is a lever arm.  And if you displace any of the core bones (spine, rib cage, shoulder girdle–rarely pelvis) you affect what all of the other satellite bones can do.

So if that elbow comes in, I don’t have to intercept it.  If I can modify the position of the ribs, the spine or the humerus, I don’t have to worry about it…and if I am already in contact with any of those parts, a light push in the right direction will not only be easier, it will be much faster, require less strength/speed and be infinitely more sure than trying to intercept an attack in space.

We have a couple of games to start developing this skill– puppetmastering and elbow chi sao.  Structure and leverage are intertwined and damnably important to both offense and defense at this range.

At this range, you and the threat are both working structure, trying to smother or drag potential attacks.  One of the key offensive skills is the ability to find or create pockets of space in which you can strike.  There are some systems of power generation that require zero space, but I’m not that good at them.  Most of mine require about three inches (the one-inch punch requires about three inches too).

Aside– don’t want to get in a long debate.  I can put my top knuckle in contact with the threat (zero space) and hit hard, but the hit comes from the bottom knuckles– which move about three inches. Zero space hitting means (to me) no visible movement, basically accomplished with skeleton bounce.–Aside ends.

So creating the pockets is critical and, again, has to be something you develop an intuitive feeling for.  Not so much for when you create or find space.  That comes easily.  But defensively, you have to be able to sense when the threat has opened a dangerous space, because something very bad is going to move through there very quickly and into your hurty parts.

And this goes back to manipulating structure.  You can make the space go away. You can try to fill the space (block).  But frequently you can merely tug or push on the shoulder (or neck or whatever you happen to be touching) and change the threat’s orientation.  He still has that pocket of space, but it is no longer aimed at you.

You have an orientation.  You are facing a certain way.  So is the threat.  The positional battle in infighting (or any good fighting) is to get to the dead zone, the point where all of your weapons are on line and all of the threats are pointing the wrong way.  Attack from behind or the rear flank, in other words.  But for infighting this isn’t just a matter of your motion, but what you can do to the threat’s orientation, via his structure.

Probably too technical, but Mick has challenged me to try to put infighting into words.  Working on it.