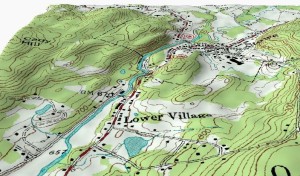 Terrain is, literally, a big topic and I know I can just touch on it in a blog post.
Some things that need to be in there:

There’s way more. This is stuff I do but rarely teach. I’m finding a direct correlation between how well I can write or speak about something and how often I teach it.

Reading Terrain–
One of the elements to be aware of is flow of resources, and since we are talking about self-protection, you are the resource. Bad stuff happens in predictable places. A mugger could starve waiting in random dark alleys. But the mouth of the alley between, say, the convention center hotel and the nearest strip club will give you a lot of unaware, out of shape, drunk, non-local, cash carrying businessmen. Think about the victim profiles and where you would hunt for them.

Another element are forced flows. Places where you must pass too close to a blind spot. Places where the threat doesn’t even move but his prey comes within arm’s reach. There is a reason that women despise nightclubs with long hallways to the restroom.

Blindspots and vision spots. Places you can’t see into (blind corners, pockets of shadows) and places you, or the threat, can watch easily from. This list expands as you get better at utilizing reflections and shadows. And that skill is manipulatable as you can position yourself to take advantage of shadows, but you can also adjust a windowed door or place your sunglasses to maximize useful reflections.

Escape routes, choke points and death funnels. How well you must know terrain and how you use it changes by mission. Defensive strategies use funnels of death, offensive strategies need to bypass them quickly, for instance. The ‘funnel of death’ is any small area that you and your team must bypass that allows the enemy to concentrate fire. Choke points or bottlenecks in other words. Escape routes are cool and the bad guy will likely have planned his. You should look for them by habit. The trouble with hiding strategies that have only one escape route is that by definition, when you are found, the threat will be blocking your escape route.

Cover and concealment. Cover will stop a bullet, concealment will keep someone from seeing you. Hiding behind drywall is concealment, but drywall won’t stop most bullets. It’s not cover. That said, I’m a little disturbed with the idea with cover as a category. Concrete blocks are not necessarily cover for .308 rifle rounds. I’ve shot through those. Anyway, think of cover as a guideline. Better than nothing and always use it, but don’t count on it. Also, remember, that some things change with angles. A stick-built house offers practically no cover… except if you are shooting down a hallway, the threat’s bullets have to engage, because of the angle, sideways drywall and all of the studs.

Everything above you need to be able to see, but you also need to be able to exploit. How do you see around a corner before you negotiate it? How do you angle to get maximum visibility at safest distance. How do you cramp an assailant’s movements? How do you use the environment instead of simply mitigating the effects? (That’s what I love about day two of the A&T seminar). How do you position yourself to maximize your useful information and minimize the threat’s?

And what is there in the terrain that you can change? Already mentioned adjusting doors and placing.