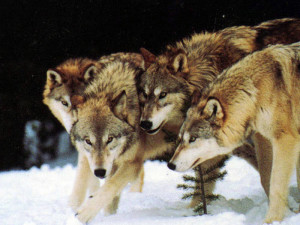 One of my greatest ‘Oops,’ was introducing the concept of Alpha to the self-defense world. I’ve done my best to back off the idea and admit my error. That’s because too many people THINK they understand the concept. Here — although it is fiction — is a good summation of how wolfpacks actually work. (Yes, it’s fiction backed by biology)

A wolf pack is like the mafia.Everyone has a position in it; everyone is expected to pull his own weight.

Everyone’s heard of an alpha wolf — the leader of the pack. This the mob boss, the brains of the outfit, the protector, the one who tells others where to o, when to hunt, what to hunt. The alpha is the decision maker, the capo di tutti capi, who, from ten feet away, can her the change of rhythm in a prey animal’s heart rate. But the alpha is not the stern disciplinarian that movies have made him out to be. He’s far too valuable , as the decision maker, to put himself in harm’s way.

Which is why in front of every alpha is a beta wolf, an enforcer. The beta rank is the bold big thug who is pure aggression. He’ll take you down before you get too close to the boss. He’s completely expendable. If he gets himself killed, no one will really care, because there’s always another brute to take his place.

Then there’s the tester wolf, who’s very wary and suspicious, who doesn’t trust anyone he meets. He’s always scouting for change, for something new, and he’ll be hiding out at every corner to make sure that, when and if it happens, he’s there to alert the alpha. His skittishness is integral to the safety of the pack.And he’s the quality control guy too. If someone in the pack isn’t pulling his weight, the tester will create a situation where the other wolf has to prove his mettle — like picking a fight with the enforcer, for example. If that beta can’t knock him to the ground, he doesn’t deserve to be the beta wolf anymore.

The diffuser wolf has been called many names through the years, from Cinderella wolf to the omega. Though at first he was thought to be a scapegoat and at the bottom of the hierarchy, we know now that the diffuser plays a key role in the pack. Like the little geeky lawyer to the mob who provides comic relief and knows how to keep all these other strong personalities calm, the diffuser throws himself headlong into all the intrapack bickering. If two animals are fighting, the diffuser will jump between them and will clown around, until suddenly the two angry wolves have taken their emotions down a notch. Everyone gets on with his job, and no one get hurt. Far from being the Cinderella figure who always gets the short end of the stick, the diffuser holds the critical position of peacemaker. Without him the pack couldn’t function: they’d be at war with each other all the time.

Say what you will about the mafia, but it works because everyone has a specific role to play. They all do what they do for the greater good of organization. They’d willingly die for each other.

The other reason the wolf pack is like the Mafia?

Because for both groups there is nothing more important than family.