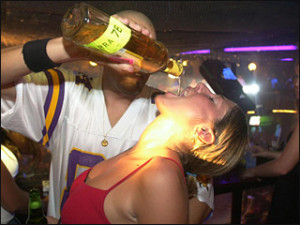 Without the presence of a person with violating intent, there can be no sexual assault. Therefore, in such a situation regardless of how much a person drinks, she or he will not get intentionally sexually assaulted. That factual logic is the bases for the argument that dinking does not cause sexually assault.

According to popularly quoted studies, 1 in 5 college women will be sexually assaulted during their time in college (other studies have lower rates). Therefore, it is also a fact that there are people (statistically men) with violating intent on college campuses. It is also widely held that these men with violating intent make up about 6% of the male population, but they commit the vast majority of sexual assaults through serial offending.

The women who did not get sexually assaulted either were not in the presence of men with violating intent, OR the men didn’t have the means AND opportunity to commit an assault.

On the flip side, the women who did get assaulted (by men) were in the presence of men with violating intent AND those men did have the means AND opportunity to commit the assault. Typically, the means and opportunity comes in the form of the inequality of having greater relative situational influence over the selected victim along with being able to isolate the target from her protective resources of family, friends, and policing agents.

One popular method used by offenders to create greater inequality through the lowering the target’s ability to resist social, verbal, and physical coercion is by having the target drink alcohol, or by selecting potential victims that already have drunk alcohol.

In addition, perpetrators are more easily able to isolate their targets from protective resources because the intake of alcohol has lowered their targets’ ability to make critical decisions and assess their situation as it evolves and deteriorates.

Typically, if the victim was drunk, it is more likely the sexual assault will NOT be reported since the victim will be unable to recall the details of the violation. The victim’s alcohol intake will also make it less likely that her (or his) story will be believed. It will make it more likely that the victim (and others) will partially blame herself for what transpired. It will also be easier for the offender to use the victim’s drunkenness as a rationale to claim the violation was actually a consensual activity. As a result of these factors, a drunk victim makes it less likely that the offender will face consequences for his or her actions. Therefore, she (or he) makes for a more attractive victim than someone who is more likely to enforce a boundary violation through active resistance or by post violation reporting.

Therefore, while there is no direct causation link between women (and men) drinking alcohol and their subsequently being sexually assaulted, there is ample evidence that drinking large amounts of alcohol is a factor that provides people with violating intent greater means and opportunity to commit violations among the student population. And college campuses are well known to contain people with sexually violating intent.

The Sexual Victimization of College Women

Fraternities and Collegiate Rape Culture: Why Are Some Fraternities More Dangerous Places for Women?