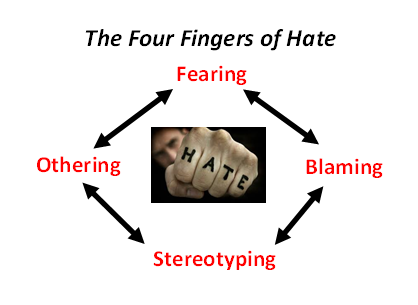 Ever wonder why people say and do hateful things to individuals and groups? Here is a test you can try.

Think of a group of people you dislike. Everyone dislikes some group of people. After all, those people cause problems for you and society. They are all alike, if you think about it. Wouldn’t it be scary if they were in control? Basically, they are just bunch of lowlifes.

See that wasn’t so hard. Maybe you thought of a whole bunch of groups you dislike.

The Four Fingers are used to create hate. They are:

But you only dislike that Group, you don’t hate them. Yet…

Now, let’s assume you start bumping to other people who have the same distain for the Group. They talk about how the Group is a problem, uniformly dangerous and contemptuous. You LIKE a few Facebook pages and/or join online forums that constantly reiterate this message. Vocal detractors actively preach about the dangers of this Group. They talk about how this Group is destroying your way of life. They provide examples of how the members of this Group are to blame and are all the product of an evil culture.

Before long, your dislike has turned to hate and you are a full-fledged supporter of hating this Group.

Which Group are we talking about? Well, it could be:

A key element key to building tribal solidarity and recruiting supporters is creating and spreading hate of a designated scapegoat group. Sharing hate is a bonding experience.

Which causes and individuals use the Four Fingers of Hate to develop support for their cause or themselves? All you need to do to find out is to run a simple test. Do they or their supporters:

Now, go back to the list of Groups mentioned above and highlight the ones that engage in the Four Fingers of Hate. Most likely, you will be highlighting a lot of them. Which ones do it the most?