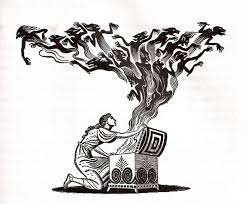 The myth of Pandora’s box always confused me. It made no sense. After all, Hope was in the box filled with all of the evils and ailments of men– famine, disease, death, jealousy, anger– and in order to get the benefit of Hope, it was kept in the box, not let out to infect the world.

Even as a kid, I thought that didn’t make sense. Why Hope included in a list of evils? If the evils could only affect the world by being released, how could Hope help anyone by being caged? Dumb.

As long as I’m cataloging some dark thoughts…

In a drawn-out violent episode, the threat wants to keep the victim from effectively fighting. In a true blitz, that’s not much of a problem. Close distance, distract, flurry attack. The victim tends to freeze. In a longer, drawn out, ugly scenario (think secondary crime scene and all that implies) an unconscious victim doesn’t supply the necessary ‘fun’ but a conscious victim might well fight. And so the threat has to get control of the brain.

Not always, and don’t take anything I’m writing here as absolute. I’m trying to set up a specific type of event to examine here..

Teja described it best (and I think we captured her little talk in the “Logic of Violence” DVD coming out soon.) The threat does a mix of savagery and niceness, making the victim think her only hope is in being nice and keeping the threat nice…and so the victim doesn’t fight.

Her hope keeps her from fighting.

And it makes me wonder how many people over the millennia died without fighting when they desperately needed to fight. How many waited for rescue or prayed for intervention, and let themselves die? And how many prevailed when they realized there was no hope and fought with everything they had?

Were the Greeks saying that hope is the one evil you must lock up in order to fight the others?