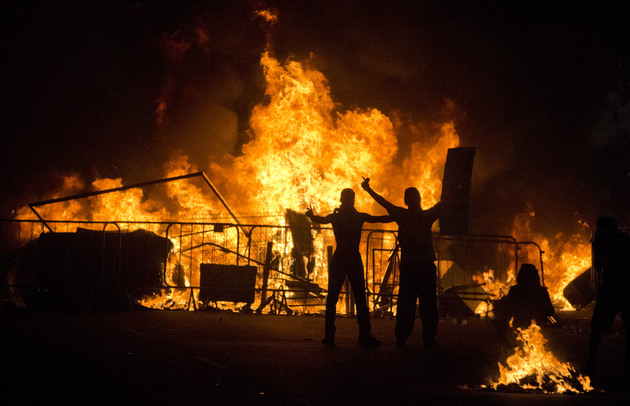 Let me throw something onto the table. Something about ideological rage I’ve noticed but haven’t been able to sum up quickly

Three lefts, two rights and another left takes you to a very specific place (conclusion). A place where the conclusion seems self-evident and IF — atsa big if — all the turns are correct, so too is the answer.

I cannot stress that last enough. This is a big part of the behavior who want to use facts and logic to support their beliefs. (Instead of just coming out and saying, ‘This is what I believe’ they try to give credence to their position — often fanaticism – by claiming they’re talking ‘facts’ and undeniable truths.) So once again: If all those ‘turns’ are the ONLY interpretations, that would indeed, be the correct answer.

However, life isn’t that simplistic. Sticking with the analogy, each of those turns are four way intersections. You can turn left or right, go straight OR you can turn back and go to the previous intersection. You can look at the intersections as variables or influencing factors if you will. A couple of points about that. First, if you break the exact turn pattern and you end up in a different place (with a different conclusion.) Second, is the turns themselves. Let’s say any turn relies on interpreting the data in a very specific way. To make turning this way self-evident, you HAVE to interpret the data in this manner. (See footnote) Often to the point of excluding or dismissing other interpretations (e.g., saying “that doesn’t matter”).

It’s those that influence what happens at the intersections. Unfortunately, it’s also that these variables are denied by certain folks. Their personal interpretations are such that you can ONLY turn certain ways at certain intersections. There is no right turn, forward or turn around when you come to this particular ‘left turn.’

In fact, with some they don’t even see them as turns. To them it is a straight path to a self-evident conclusion. A conclusion that is both infuriating to them and comes with a prepackaged answer. The two are usually completely inter-meshed. So to question either the conclusion or the process is hearsay. You risk the dragon’s fire if you do.

Now the question is: Is that the conclusion they want all along?

This is actually a chicken and the egg issue. Recent work — although it’s not really loudly advertised — is that violence and chronic anger seems to have two correlating factors. Excessive self-esteem and lack of ability. (This is over and above the model that anger has three root causes – preservation of 1) essential needs, 2 ) self-esteem and 3) core beliefs) Basically the new findings prompt the question of how much anger/violence is based in someone thinking too highly on oneself, but not have the means to back it up? (Old quip, if you’re so smart,why ain’t you rich?)

If we look at things from this perspective we have to wonder about the connection between the ‘true believer’ with his/her anger and the ideology. Starting with was it the ideology that made him/her mad OR was the person already pissed and looking for an excuse to vent his/her spleen? As such the ideology — dare we call it a belief system — gives him/her a ~cough, cough~ credible justification for the self-permission to act out (especially to attack and punish others)

Followed by the question of did the embracing of this “three lefts….” ideology make this person more angry and intransigent, or did having the excuse he/she was looking for feed and grow that aspect of the person, OR is it a combo of both?

Footnote — yeah, even my fragments of thoughts have footnotes — Anyway, you can train yourself to spot this by looking at data that is being presented immediately followed by adjectives, descriptors and connotative words. For example, talking about shootings by police the use of the word ‘murder’ Murder has some very specific meanings and connotations — largely having to do with malice. It also triggers an emotional response. Homicide means death at the hands of another, but allows for a wider variety of reasons. It carries less emotional triggers. Train your subconscious to alert you when someone uses an emotion/judgemental triggering word or descriptor and you’ll see how often ‘three lefts….’ types use this strategy.