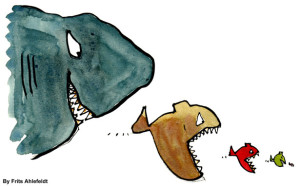 ” I am wondering, can these signals be manufactured? Is it something you can put out convincingly without actually being a bad ass, or equivalent. If so, how? Is it something, if you have that “Don’t mess with me” attitude, that you can hide? If so, how?”
~sigh~ I am often asked these kinds of questions. The problem is most people asking about faking it, have no idea what the dynamics of what they’re wanting to fake. Here is an old answer from 2007 to give you an idea why there are no simplistic answers.

The answer is “it depends.”

The question you are asking is very simple to ask, but difficult to answer. First, it is based on many different levels. Since we just threw some catfish, perch and feeder fish that school into the pond, there’s an analogy that works. The smaller fish stay on the surface and in the shallows. The bigger fish mostly stay in the middle depths. The biggest fish and the cat fish go down to the bottom.

So you have top, middle and bottom feeders. Plant eaters, omnivores and pure predators. The behaviors (signals) of the various fish are wildly different. The small schooling fish are fast and nervous. The koi (carp) are slow-moving, garbage scows that eat plants and other fish with equal gusto. When it comes to eating smaller fish, they tend to bully them into a corner and then snatch them up. The predators are slow to move into a concealed ambush position, wait for prey to come close and then lunge quickly. The two larger groups of fish eat the smaller … except the smaller fish themselves will eat fry (baby fish) if they get a chance. If you watch that, you will see the goldfish/rosies/guppies (the feeders) use pretty much the same strategy as the koi.

What I have described is a multi-tiered process of predation based on size and nature. The omnivores are scavengers/opportunist (bullying) whereas the perch and catfish are more distinctly predatory (working to set up attacks). Thing is the koi far outnumber the perch/catfish. So the little fish perceive them as the bigger threat. (Which, they are in point of fact — to the little fish.) While they all eat smaller fish, smaller fish is relative. A goldfish that is safe from a koi, isn’t safe from a catfish. While a guppy that a catfish won’t even bother about isn’t safe from a small koi.

Now we can get a little fanciful. Let’s say the koi had a certain look I can imagine them with their little leather jackets, earrings, studded belts, with cigarettes dangling out of their mouths and bad attitudes). On the other hand, the predators had another look. Let’s imagine the perch “dripping” blue. (Dripping is a term referring to a collection of a certain color among a person’s clothing that identifies them as belonging to a particular organized gang.) Still the catfish, who are by far the nastiest predators of all, are very low key. So we’ll say they’re dressed in Armani suits and drive big cars with trunks large enough to put bodies in. Each of these send a very specific set of signals.

Also you will also see a “don’t fuck” with these guys among the predators. The koi may be more numerous, but they leave the perch alone and EVERYBODY leaves the catfish alone. This works because usually they are operating on different levels.

Here’s the thing. There are some goldfish that started out as feeders, but who managed to survive. They’re big enough now not to be sucked down by the bigger fish, but they aren’t big enough to eat anything but the smallest fish/fry. I mention these fish because amazingly they are the ones that are the most aggressive and pushy. It’s almost as if they have the most to prove to everyone. I can imagine these little big fish going to Wal-mart to get their studded belts, buying their cheap leather jackets at swap meets and getting their bling from street vendors. In other words, their attempts to send the signals that they are “big bad ass koi” is cheap and tawdry. As I said these little big fish are the most stupidly and needlessly aggressive, and they even chase some of the smaller koi. But the bottom line is they are punks … I’ve yet to see them try anything on the catfish or perch, but I suspect that is because quite simply those two wouldn’t register on their radar (unless it’s as food). They’re too busy trying to imitate the bullies of their lives, the koi. That is their definition of what a “bad ass fish” looks like. Yet their attempts are over the top. Still, they are total terrors to the smaller fish.

Now I mention all this because, as a human standing on the edge of the pond, I can see that despite their aggressiveness, they are avoiding the bigger koi, the perch and the catfish. I can also see the differences between the species’ behavior. There is a big-assed difference between the kois’ swaggering and bullying vs. the quieter and more dangerous predation. And yet, the smaller fish don’t see how the koi interact with the real predators — and believe me the koi do a fine job of “swaggering” wide of the predators on their way to bully other fish.

Interestingly enough, the predatorial fish have worked out territories where they pretty much hang out and don’t violate each other’s space. Territories and pacts that the little fish never even notice.

On the other hand, because they are playing that game, the koi have to maintain a certain look very much for each other because, within their world, there is also a pecking order. The small koi still give way to the larger ones even though they aren’t going to be eaten by them. So getting fanciful again, imagine the smaller koi trying to act like big koi for each other, while at the same time being submissive to the bigger koi. There they are strutting and swaggering to impress other smaller koi. And if they don’t see enough bling, they’re going to think that fish is fair game to bully. Right up until the moment they fuck with a catfish.

See that’s kind of the problem that you run into when you are talking about sending out different signals without being that. While it may scare the shit out of the smaller fish, might work on near equals, the real bad-ass fish aren’t impressed.

Now that’s life in the pond. But in many ways, the same goes for dealing with humans. It’s a fine balance between trying too hard, looking chintzy and like a punk, and having a vibe where you and the big predators will look at each other and say, “I know what you are. You stay on your side of the room, I’ll stay on mine, and we’ll just get along fine.”

If you’re playing this game, you need to send a signal on a wide enough bandwidth that all the camps will recognize, in their own way, to “leave this one alone” while at the same time, not terrorizing all the civilians around you. Which creates its own set of problems.

And for that strategy, I give you the turtles… who pretty much everyone leaves alone.