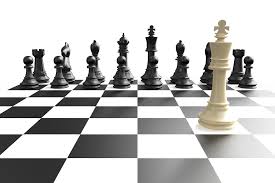 Every instructor at some time has said that the worst person to spar against is a beginner. They will always do something totally unexpected, punch incorrectly (sic), but hit you on the nose, block your shin with the point of their elbow, close down your kicks without ever planning to and generally cause chaos. The problem is they don’t know the rules. They don’t know we are supposed to be better at the game we’re playing and they don’t yet know enough to be impressed and let us score on them. They make the same mistake all beginners do – they aren’t yet conditioned by combative rules!

Also we find it difficult to read what they are going to do because, as yet, we haven’t programmed them to move in such a way that we can detect early on what they are about to strike with. That will come with time when we’ve moulded them into the rules. And rules we have – complex, complicated and sophisticated rules about combative engagement and how it should happen within the art we practice. This all may have a facetious ring about it but, unfortunately, there are also some unfortunate truths.

Fine so far until we extend the analogy of the beginner to the street, where the person who, having had umpteen pints of best ale or whatever, decides you’re a suitable case for treatment is also somebody who hasn’t gone through the tedious procedure of learning all the rules. He doesn’t wait for a signal to start, in fact, he probably won’t even convey to you anything is about to start, rather simply knock you out. He won’t exchange complex blows, blocks and counters, he’ll simply plow into you and before he does that he may have destroyed your resolve to fight with such violent language and display of aggression that you’re out of the game before you start. He’ll come in swinging so as not to present a target, be hard to hurt because, unlike your students in the Dojo, his pain threshold and fear threshold are both enhanced with alcohol and adrenalin

You see the problem is that ‘high level martial arts only works best against high level martial artists’ – it’s thugs and chess – you can’t play chess with someone to whom draughts is mentally taxing and who doesn’t know the rules. It’s this point that both Geoff Thompson (my partner in the BCA) and I try to get over time and again to people that, unless you are prepared to rethink the problem of how you adapt to the reality of violent street confrontations, simply relying on Dojo skills won’t work. Remember one thing, that the less a person knows the more dangerous they are, because the better they are at what it is they do. Also the less trained a person is in, say, a martial arts system, the more underhand they will be in trying to get close to strike. They will also be more violent and are prepared to cause you more damage than you would have done to them.

Try and put most martial arts systems into context and that is they come from cultures where display is paramount, the exchange of high level skills is required by the watching public and that everyone feels cheated if the fight ends on the first blow. Taken to extremes one can look at Mongolian Wrestling, part of the yearly National Games, or Naadam, in Ulaanbattar. People have waited a whole year, traveled maybe hundreds of miles, cooked food for the day and will not be cheated by means of short fights – one fight can last hours! Most Eastern martial arts have the same constraints, particularly the display of complexity and competence, whereas, by contrast a fight in a bar is never pretty, never takes time and never shows great martial skills which is counter to how martial artists believe it should happen. Do not take your Dojo model of combat into the bar – this simply becomes a case of martial arts in jeans and will get you seriously hurt.

They practice the two skills of ‘sucking you in’ or ‘psyching you out’. I used to do this to people when working on the door where, and if the distance was wrong I would feign fear or worry (usually not difficult) which made my opponent overly confident and would cause him to close the distance and come into my range. The other alternative was to ‘psych them out’ with either a display of aggression or a display of massive confidence (not actually felt, but well disguised). Both can work, but don’t try the ‘psyching out’ option if you look more like a concert pianist, or art school teacher, as the bluff can’t be carried off.

Be assured of one thing, though, and that is that the person who practices the low-key, suck you in deception is by far the most dangerous. The one who tries to psyche you out with the massive display of aggression, swearing, posturing and threats is simply practicing theatre. It doesn’t make him less dangerous but it does make him predictable and, providing you’ve armour-plated yourself against such displays, when he realises that it isn’t working he’ll have a big confidence dip. Also, he doesn’t expect to get a pre-emptive slap or strike when he’s halfway through his performance.

Both tactics can work for you and both can be used against you. I mentioned a display of confidence and this is probably the one most people should work on. It demands you display no emotion, display no physical capabilities and are able to talk without giving away how you actually feel. Watch doormen – this latter option is the one they cultivate the best. They have become skilled at not betraying emotions and this has been helped in no small way with the advent of CCTV which may monitor their every move and expression, particularly aggression.

What we can use and what people use against us are two sides of the same coin. In nearly all cases the person who is facing you down with a display of aggression and threats is no less nervous or frightened than you it’s just that he’s now working to his rules. You see the problem is that in the Dojo we don’t practice ‘verbal violence’! In fact, we do just the opposite, practicing politeness and control, with little if any displays of true aggression. However, when you face it for the first time, it may be enough to freeze you into immobility and make you the loser even before a blow is thrown.

All my teaching, either for the police or others is centered around not what techniques will work for us in the street, but what psychological, physiological and cognitive barriers will stop us handling and controlling the violent encounter as we would expect and hope to and are trained to. Very simply, this is to do with the body’s response to stress as it impacts the sympathetic nervous system and also the endocrine system. To this can be added a host of other very strange psychological and physiological symptoms that overwhelm us, and which all serve to negate any physical skills we have accumulated over the years. In a separate article I’ll detail the process of what happens and why, but for the moment believe me it doesn’t happen as you may think it does from the comfort of the Dojo.

In a separate concept I’ve developed called the ‘One Yard Rule and the Egg Timer’ I mention how we burden ourselves with too many techniques, whereas your attacker actually has the benefit of knowing very little and so can’t confuse himself about what he is going to do. Most critically, though, he will not be caught between the two stools of attack or defence – unlike you. He has one simple plan and that’s to strike and at a point he knows he can make it work. He wants the first strike to finish you so that he and probably his mates can then go to town on you. As trained martial artists we have choice, to pre-empt or wait and defend, but it doesn’t work to our advantage. Like our attacker we should have only one consideration and that’s to be first, whereas having the choice actually weakens our resolve and decision making powers.

There is a metaphor for life which I have always thought very apt for this particular issue and it’s the story of the Fiddler on The Roof, which is essentially to do with the lifelong battle for all of us to achieve the best we can in life making the most of our innate talents, set against our innate fear of the unknown and risk of failure which usually inhibit us. This is the fiddler who goes through life trying to fiddle the best tune he can whilst at the same time trying to keep a grip of the roof so as not to fall off. If he could be brave enough to be less concerned about his concern over keeping his balance on the roof his playing would be tremendous and he would reach his potential, but all the time this is set against the fear of falling off.

When we are faced with a violent aggressor we are just like the fiddler on the roof, caught between what we have been told we should do, which, probably, is to wait and defend, or pre-empt and strike before he attacks. At such times our real, deep seated confidence in our ability to hit hard is also brought into question – ‘will he go down or will I just annoy him and make matters worse, in other words, should I cling onto the chimney a bit longer and try and talk him out of it’?  I’ve been there myself and the price to be paid for an inappropriate mindset is too high, so believe me you need to let go of the chimney!

This is why such concepts as creating a ‘reactionary gap’ are inherently dangerous. A violent aggressor will always fill any gap you create if you try and step back. You’ve also created more confidence in him, less in yourself and, from a purely objective, tactical aspect you’ve stepped back into the unknown. As a concept it fails when you have nowhere to step back to i.e. if you have a wall, busy road or vehicle behind you, but more critically it develops a negative mindset. To upset an offender’s plan of action (POA) you need to do the opposite of what he expects and that’s to go in and to him.

You have to drastically reduce your options, so keep it simple, be first, be impactive, predetermine your ‘POA’ before you engage with the person by means of a structured assessment and forget you’re a 6th Dan or whatever. Let go of the roof and remember you can’t play chess with someone for whom draughts (Checkers in the U.S.) is the most complex game they are ever likely to tackle.