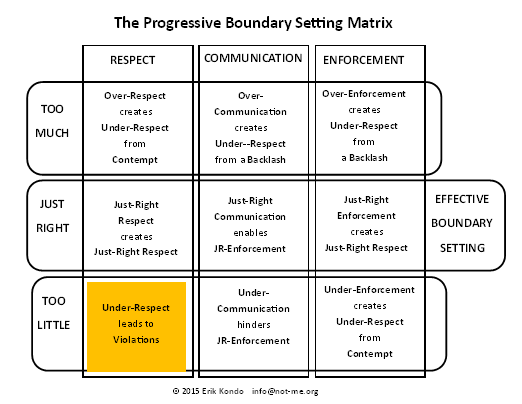 Under-Respect is effectively “a lack of Respect“. It comes in many forms. In order to understand Under-Respect, it is necessary to understand Respect. Respect is commonly thought of as “the admiration for someone or something”. But Respect is also a feeling that serves to restrain people. It is a form of self-control. When people are respectful, they are concerned about the consequences of their actions. On the other hand, those that lack Respect, act without concern for the consequence of their actions. Under-Respect can also be characterized as a lack of caring or concern for someone or something. It could also be outright hostility.

Under-Respect doesn’t cause violations. But Under-Respect leads to violations because the “self-restraint” is lower or non-existent. Therefore, a person who lacks Respect for the rules of behavior has less or no reason to NOT violate them if he or she so desires. Respect creates a threshold or boundary that must be crossed for a violation to occur. It takes motivation (intent) to cross the boundary. But the lower the level of Respect, the easier it is to cross the boundary into violation, and the less motivation required to do so.

The fact that there are so many words that describe various aspects of Under-Respect is testimony to how common it is in society.

Problems of sexism, racism, and ablism are effectively large scale Under-Respect of specific populations due to gender, race, and disability.

People are also more likely to Respect those that Respect themselves. Therefore, it is also common for victims of violations to have low self-esteem. Said in another fashion, the demographic of people with low self-respect has a high rate of victimization.

Building Respect for Under-Respected populations and people typically requires both external and internal change. Unfortunately, a tremendous amount of resources are usually spent debating the merits of External Change (society changes) vs. Internal Change (individual changes). External and Internal are seen as mutually exclusive as opposed to complimentary. Usually, the undesired end result of this despute is for the status quo to remain the same.

Respect is an elusive quality. You can demand it, but you may or may not receive it. When the Under-Respect of a population exists due to othering, stereotyping, and bias (ignorance), it is possible to build external Respect through the process of education and promoting empathy. But, without a corrasponding increase in the self-Respect (internal change) of that population, these gains will ultimately be lost.