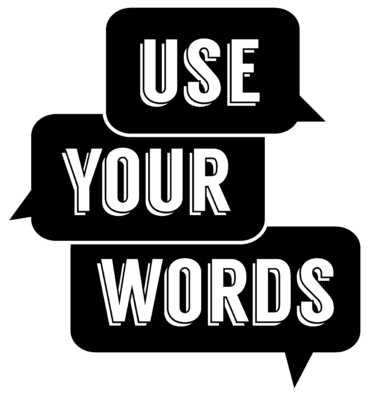 I’m a big believer in ‘Use your words.’

Starting with if someone is fuckin’ furious with how words have been used to hurt and abuse them, it’s probably a good idea to stop using those same words — especially if the guy is about to shoot you in the face.
Perhaps a different choice of words is in order.

Unfortunately, we face another problem. Well a few of them actually. One is how many people think their words give them power. Subset to that is how changing word choice is deemed losing power (e.g., I can’t be polite, they’ll think I’m weak” or “I don’t have be polite to THOSE people”).

Two is — despite how many people think words are power — how incredibly limited in word choice most people are. I’ve long held ‘if you can’t explain a concept in simple terms, you don’t understand it.” Many people buy into not just ideologies, but canned rhetoric. Ideologies and rhetoric they don’t actually understand. This is demonstrated by how fast they fall apart when trying to explain a concept without using buzzwords and “everybody knows…” I’m not even talking about challenged, I’m talking about falling apart when asked to explain it without buzzwords.

Three is related to the first two but is a specific manifestation. When you’re driving, no matter how well you set your mirrors, you will have blindspots. The only way to see into a blindspot is to physically change your position (lean forward, to the side and turn your head, etc.) This parallels fixed language when it comes rhetoric and ideology. Fixed words carry specific connotations, understanding and bias to the user. Yet the user believes the word gives full understanding and eschews moving to a different position to see the blindspots. It is not until you try to describe things without using buzzwords that you’ll be able to see holes in the ideas and rhetoric — which might explain why so many people hesitate to do so.

Four is what a buzzword means to you is different than what it means to someone else — especially if that word has been weaponized and used in attacks. If someone react negatively to a word choice
1- it might very well be that he is an asshole (many people use this interpretation as grounds to dismiss) OR
2- it might be the person has been attacked by people using that same word
3- it could be the person is using your use of it as an excuse to attack you. (this is not the same as being an asshole as often assholishness has a strong defensive element — this is outright aggression).

Five, these behaviors are NOT exclusive to any particular side. But if you don’t want to get into a fight, it kind of helps to seriously consider your word choice.