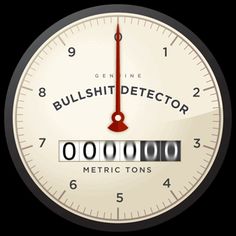 Don’t just do your homework, but to put on the BS sensors too. Start by having a basic understanding of statistics and how important it is to look at ANY categorization and understand the parameters and standards that go into that category; much less how they came up with that number. There’s an old adage ‘Figures don’t lie, but liars do figure.’ Most of all, whenever possible go directly to the source report, someone is using the statistics of to support the unquestionable/ authoritative/ rightness of their position.

And this from even supposedly reputable sources. There was a CDC report that came out with a staggering number of children killed by guns. It was used as the basis of the argument for the need for gun control — to save the children of course. Then it came out that the reason for such an incredible high number wasn’t just that it included gang related murders, accidental deaths and suicides, but that the CDC had deemed everyone under 24 y.o. ‘children.’ While I have a hard enough time calling a 17 y.o gangmember a child (the correct term is minor), I really have problems calling someone — three years past their majority or six years past age of license — a child.That’s why you always need to ask ‘how do you define these categories?’ when someone throws numbers at you.

Two situations need to have red lights and sirens go off anytime you come across them. One is the use of the term ‘estimated.’

There are two subcategories of this terms usage. One is predicting the future. Psychic jokes aside, we do this all the time. Educated guesses are a necessary part of life. They are also a BIG part of salesmanship. As in someone is trying to sell you something and get something from you. (e.g, If you buy into this, you’ll make ____ [insert estimated number here]) Two is to inflate numbers.– usually to create a crisis that the person providing the number can help solve. When used this way, ‘Estimated’ has a direct translation, “We don’t know, we’re just making shit up to scare you so you’ll _____ (fill in the blank).’ In both subcategories pay VERY close attention to how fast the word ‘estimated’ is dropped and those same numbers — from then on those numbers — are presented as absolute and unquestionable fact.

The second situation that should set off klaxons is when someone won’t let you see the source numbers or the process they used to arrive at those statistics. This is especially common when people collate numbers based on reports/cases you aren’t allowed to see.

The only reason people found out about the flaws in the CDC report methodology is because is was publicly accessible. Important because according to the numbers presented there should have been corpses of five year-olds littering the streets.