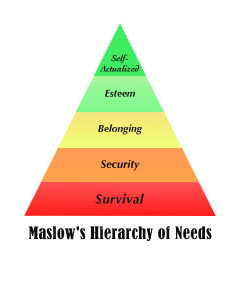 The idea is simple.  If you are in danger of dying—starving, thirsty, sick or about to be killed and eaten– that is your highest priority. Until you have taken care of your immediate survival needs you don’t give a damn, and you don’t waste resources, on anything else.

Once your immediate physical needs are taken care of, you can start thinking about your physical security.  How do you arrange to have food and water tomorrow and next week?  How do you get shelter to protect you from the elements and from predators?

The next stage is the awkwardly titled “Belongingness” need.  Humans in the wild are poorly adapted to live alone. Providing all of the physical security needs are easier with a group, with tasks divided among several people.  This is compounded by the fact that human children cannot survive alone.  We are born into a family group of some sort and spend the rest of our lives in groups.  Not only are few humans fit to survive alone, most can’t even truly imagine being alone for any length of time.

Almost as important as being in a group is knowing your place within that group.  Maslow linked this to status in the group, being loved and respected.  That’s nice, but the need is deeper and less logical than that.  Even being low status, a pariah, is less stressful than being unsure of your status.  Most people have felt this uncertainty joining a new job or new team or a new school. You’re on board, maybe even have a title and official status… but you need to see where you fit with the social groups, the unofficial status hierarchy.  Again, fitting in somewhere is far more important than where you fit in.

Lastly, according to Maslow, if all of these needs are fulfilled an individual can self-actualize.  You can live your dreams.  Follow your heart.  Write poetry or sculpt or do philanthropic charity work.  Or you can live out your serial killer fantasies.

That’s important.  Not everyone shares your dreams.  Not all humans draw joy from the same things.  The pattern (whether of Maslow’s hierarchy or the scripts we address later) are nearly universal.  Their expression, however, can run the entire spectrum of human thought and feeling.  If you give a man everything he needs, he will start looking for what he wants.  What he (or she, men have no monopoly on this) wants may be to dominate or to destroy.  You cannot simultaneously ignore this fact and deal with it.

You cannot simultaneously ignore problems and solve them.

Maslow’s Hierarchy creates a pyramid.  The more vital something is to survival, the closer it is to the base.

As a theory, it has some obvious holes.  It implies that there could be no art without a steady food supply.  There is no mechanism in the theory for either heroism or death poems.  It also implies that these levels are something we work through from the base upwards when, in reality, our ancestors took care of the two lowest levels long ago and we are almost all born into a group.

So, in my opinion, as a theory it’s crap.  As a model, however, Maslow’s pyramid is extremely useful for anyone who deals with conflict.  If someone has multiple problems, they will deal with the lowest level first.  When a tiger is chewing on your leg, you really don’t give a damn about your relationship issues or unresolved maternal relationship problems.

Nothing you have learned about sales or mediation will help you hunt, grow or steal food.  Conversely, if you go into mediation as a hunter or thief, it will probably not work out so well.

For most people in the industrialized world, the bottom two levels of the pyramid have never been a concern.  It has been almost a century since Americans had to worry about winter starvations or an epidemic killing thousands of people.  It has been sixty years since Western Europeans have experienced invading armies.

Security Level.  Shelter, food, water.  Also savings accounts, insurance and retirement plans.  There is not a lot of fear at the security level in our society, but there is a lot of anxiety, and that drives some conflict.  You can see Union/Management issues this way, as well as some arguments between spouses.

When big problems, like starving or being eaten alive by bears fade, energy goes into other concerns.

The Social Levels (Belongingness and Esteem)
For most people, the conflicts they have been exposed to originate exclusively from the social levels of the pyramid.  People trying to work their way into a group (and others trying to prevent this), people bucking for position within the group and people breaking or disrespecting the rules of the group.

Social conflict rarely leads to serious violence.  It would be counterproductive, after all, to destroy a group you wanted to be part of or to create so much hate and fear that you couldn’t enjoy status.  When it does lead to extreme violence, such as a workplace shooting, the shooter is aware that he will not be getting a membership invitation from the group afterwards.

This is the one area where people have extensive experience with conflict, and it is easy to base beliefs on this experience.
Status struggles at work to “that’s my seat” at the bar, the patterns are predictable.  This is the level where ego gets in the way.  Where it is not enough to solve the problem, but you need to get credit for solving the problem.  Where you need to ‘teach a lesson’ or show who is boss.

Generally, the Self Actualized conflicts should be the easiest to resolve because there are no survival or esteem issues at risk. As long as both people are working from that level.  If you are writing in your free time after you have put in time at work (paycheck covers the survival needs) and are writing for joy, unconcerned about what others think (no esteem issues) there is no rational problem.  And no one working from a similar, self-actualized level will have a problem.

Unfortunately, someone who feels a need to dominate (social levels) will be driven to tell you to quit wasting your time and do something useful.

There is an exception to this.  Some of the most violent people in the world are fully self-actualized.  They are not killing and raping out of need or desperation, nor are they committing violence out of some deep psychological pain.  They kill or rape because they enjoy it.
Kill or rape is an extreme example.  Less extreme, there are people who destroy other people’s careers when they have no need and people who seduce and abandon who do it simply for pleasure.

Conflict or violence can be triggered from any level.