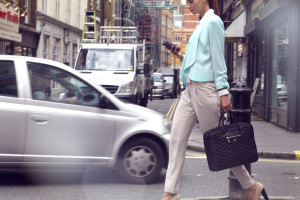 “Walk with confidence”. This is a very commonly repeated sound bite of personal safety advice given by self-defense instructors all over the world. The basic concept is that human predators are looking for weak and vulnerable victims. Those that project an attitude of confidence show themselves to not be weak and vulnerable, and thus are less likely to be attacked.

Walking with confidence is seen as the opposite of walking like an easy victim. But is that really true? What is the essential quality projected by a person that serves to discourage potential assailants? I suggest that it is not the concept of “confidence”, it is the concept of “deterrence”.

What exactly is confidence? Frequently, when I drive through the city I see people walking with their eyes glued to their phones as they proceed down the sidewalk, along the side of the road, and crossing the street. I recently saw a woman with a large book open in front of her as she read it while crossing the street.

These people are confident. They are confident in their personal safety. They are not in fear of being hit by automobiles, bikers, and other pedestrians. In fact, they are confident that other people will avoid bumping into them. They are also not afraid of being harassed, purse snatched, phone picked, mugged, and the like. It is their very confidence in their surroundings that convinces them that their actions are perfectly safe.

As a practical matter, their confidence has done nothing to discourage potential assailants from attacking them. In fact, it is their complete confident obliviousness to their surroundings that marks them as easy targets to be taken by surprise.

Then there is the second type of confident person whose demeanor is characterized by superiority. This person’s high self-confidence gives him or her an air of being better than others. This attitude is projected and picked upon by those he or she passes in the street. They literally look down their noses at other people. Depending on the situation, this attitude of confidence may provoke a reaction in which others desire to knock the person off his or her pedestal.

A third type of confident person is effectively fearless. They see themselves as being able to handle any situation that arises. Their confidence leads them to ignore basic safety precautions secure in knowledge that they can protect themselves from any type of danger.

Again, we see that it is not the concept of confidence that increases personal safety. It is actually the concept of deterrence, where deterrence is defined as anything that discourages and dissuades potential assailants. In the case of Resource and Process Predators, deterrence comes in the form of raising the risk to the assailant if he or she attacks. Raising the risk means increasing the chance that the assailant will be unsuccessful, or will suffer injury, or punishment for his actions.

In terms of social violence, deterrence comes in the form of not providing other people a reason to want to engage in violence against you, in addition to raising the risks as previously noted.

Deterrence incorporates a multitude of strategies for avoiding and evading potentially dangerous situations. It includes awareness, environmental knowledge, sound judgment and decision making. It involves being able to de-escalate conflicts and then safety disengage.
In summary, in certain situations confidence can serve as a deterrent, and in other situations confidence can encourage assaults. Therefore, “walking with deterrence” is more a more effective approach to personal safety.