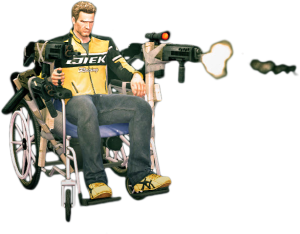 I have repeatedly come across internet self-defense “advice” for wheelchair users. The majority of the suggestions provided usually refer to how to “fight back” against attackers. The two main themes usually consists of (a) using your wheelchair as a weapon and (b) how to use being lower than you attacker as an advantage.

My first issue with these types of articles is that they frame self-defense mainly in terms of physical fighting moves. In reality, effective self-defense involves the bare minimum of Threat Recognition, Avoidance, Deterrence, and Disruption – TRADD. If you think of disruption as “fighting” moves, you can see that it is only one part of the overall strategy. We can also add Disengage (getting away) and Debrief (dealing with the aftermath) making TRADDDD. But few will remember that.

Regarding using your wheelchair as a weapon, it is commonly suggested to do the following:

In reference to being lower, it is stated that the attacker will be off balanced by reaching down to your level. Therefore, you can reach up and grab his hair or some part of his body, as he tries to regain his balance you can push him away.  Or if he has already grabbed you, then he will let go in order to catch himself as he falls. There are other suggestions that follow this general theme.

Will these suggestions work? Yes, they will work in theory. But it has also been theorized that given an infinite amount of time and infinite number of monkeys typing on keyboards, one of them will produce a replica of a work of Shakespeare.

For example, if you drop a brick on an attacker’s toes, he may run way in pain. Therefore, it could be suggested that you carry a brick with you at all times for this defensive technique.  The problem is that out of one hundred attackers, how may will run away? What else could happen?

I am sure someone can come up with personal example of how one or more of the suggested techniques worked for him or her (or a friend) in some situation. But it is also possible in those situations, lots of others actions would have worked too. Some attackers are lowly motivated and can be scared off by only the use of your voice, or by any type of spirited resistance.

So, what else could happen?

When you ram someone with your wheelchair, your arms are down and your head is forward and unprotected, it provides an attacker an easy opportunity to strike you in the face, or slap you in the ear.

After being caster smashed, the attacker could reach down grab the front of your wheelchair, pull up and flip you over backwards, and beat you with the wheelchair.

If you reach up and grab an attacker by the hair, he could grab you, and pull you out of your wheelchair drop you on your face, mount your back, and choke you into unconsciousness.

When your move backwards into an attacker, he could jump back, grab your shoulders flipping your wheelchair, slam you backwards into the ground, and stomp on your face.

Those are just of few of the possible outcomes.

When it comes to physical actions, everything possible is in fact, possible. In terms of physical self-defense for wheelchair users and everyone else, what is important is knowing what might work against whom, when it might work and what might happen if it doesn’t, and who is it likely to work for, and in what situation.