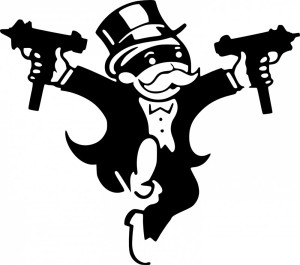 Do you believe the government (the State) should have a monopoly on use of force?

Not just ‘violence,’ but ALL uses of force. I ask this because if you are of the opinion that violence is always bad (there’s never an acceptable reason for it) then your position will more likely lean towards the monopoly ideal. My summation of this position is “Only trained professionals — that we are in control of — should be allowed to use force. Individuals should be punished for using it” (That’s a State monopoly)

On the surface, this may not seem like a bad idea. I mean hey, violence is bad so higher standards of training, it cuts back on abuse, violence and makes prosecution easier, etc. But when you begin to take it a little deeper, you run into some problems. The most obvious is “If all violence is wrong and the State has a monopoly on it, what does that make the State?”
Personally, I have a bigger problem than an existential crisis of faith in one’s politics. What makes me say “Hold the phone” is under a State monopoly —

Self-defense becomes illegal.
Stop and think about that. If the state has a monopoly on violence and all violence is wrong, then there is no difference between a murder and self defense. You are required, you have to allow yourself to become a victim. You NOT allowed to defend yourself. In fact, if you do, you will be punished — by the State.

But wait, the laws in all 50 states clearly say we are allowed to defend ourselves! I can show you the statute from my state! Okay, join me in a little reality break here Starting with there’s a difference between the ‘Law’ and our legal system. Followed by the fact that humans are involved in the legal system. And we are clever little monkeys when it comes to finding a way around rules and using systems to our advantage. In case you missed it, what the law says and how those in the legal system interpret it might not be the same thing. And while this may be a new topic for you, they have years of experience playing in the State’s legal system. One of the ways thing are played with can be found in Sun Tzu “Art of War” in the Military Maneuvering chapter: When you surround an army, leave a means to escape. This doesn’t mean what you think it does. In fact, it’s a trap. Being as it’s a Chinese manuscript, there’s always commentary. As Tu Mu puts it, “Make him believe that there is a road to safety, and thus prevent his fighting with the courage of despair. After that, you may crush him.” To bring things a little more up to date than a 2,500 year old manuscript there is the Carousel scene from “Logan’s Run.” In a futuristic, controlled and contained society nobody lives past 30 years old. But you can ‘take your chances’ for renewal (rebirth) by getting on the Carousel. If you can touch the light then you are reborn. If not, crispy critters. It’s a very Coliseum-like event with the cheering crowds and hope for rebirth. https://www.youtube.com/watch?v=xSn…

Except later on the main character Logan, discovers it’s a lie. Nobody has ever survived the Carousel. For generations, the population has been slaughtered on their 30th birthday. But it is the hope for regeneration that keeps the population in line.
I tell you this because while it hasn’t gotten to the point where it’s as bad as the Carousel — you CAN be cleared for self-defense — the game is seriously stacked for the House/State. See, the game can be rigged by saying that self-defense is allowed, but then try to set the standards so impossibly high that — in effect– everything is prosecuted.

Now knowing that an attorney is going to read this and try to twist it and use it against me. Am I saying that we’ve reached the point in our legal system were there is no such thing as self-defense? Why no. What I am saying that in a metric driven system where careers are dependent on convictions (numbers) we’d be naive to believe that doesn’t influence the arrest and prosecution process. Oh and while we’re at it, I’ll ask, “Wouldn’t it behoove an individual whose career is dependent on number of convictions to lean towards the idea of a State monopoly?” Here’s a cup of coffee. Take a sniff. You — as an individual — have to recognize that just acting in self-defense alone isn’t enough. I could get my geek on and say, “Koybayashi Maru, Baby!” But it is far more complicated than that. Starting with that your training CAN’T just be on the physical elements. Before you ever find yourself in a situation where you might have to use your training, it behooves you to adopt the attitude that you’re facing a system that believes it has a monopoly on violence — and how dare you try to trust bust! But, it has to pretend that’s not its position. (Gee, where have I seen this before?

https://www.youtube.com/watch?v=mC_… )
That is where you really do have a chance. And it’s not a false hope either.

In my book “In The Name of Self-Defense” I talk about it not really mattering what threat assessment system you use (AOJ/AOI/JAM/Five Stages). The important part is that you have a systematic and explainable process for what you did. You must be able to articulate what was going on that lead you to reasonably believe the level of force you used was necessary for your safety.

Otherwise our legal system is going to eat you alive for defending yourself. That’s just one of the many things you have consider including in your self-defense training.