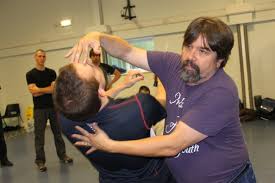 If you can, via effective movement, remove your opponent’s ability to attack, you can seriously effect his Will to attack you. In short, if someone attacks you and is not only quickly foiled, but simultaneously finds himself in an untenable situation, it often results in the decision to cease hostilities. Having said that, even if the person does not lose the Will to attack, he loses the means to attack. In either case you win.

Therefore, we can come up with the following standards about what constitutes effective movement:

1) Effective movement must — at the very least  — work as advertised. A block must keep you from getting hit, if it fails at this basic level, step back and critically examine what is going on. If you’re doing it ‘right’ and still getting hit, the problem isn’t with you, its with what you were taught.

2) Effective movement either moves you or it moves your opponent into a position where he cannot attack you again without readjusting. Or if you really want to be safe, it does both. And the more it negatively impacts his ability to attack you, the better.

3) Effective movement not only sets up your next move, but develops conditions which will enhance it by building on the original move’s success.

Sound complicated? It is and it isn’t.

Offensive Multi-Tasking
Quite frankly much confusion arises from the fact that people tend to believe that a move can only do one thing. They therefore believe that in order to accomplish three things, you must do three moves.

Simply stated this takes too long.

Conversely, a different set of problems arise when someone tries to make a move do something that it is not designed to do (e.g. attempting to hit with a block). Often such attempts take the limb beyond the original pose/positioning of the move and leaves the person exposed to counter attack — especially because it failed to achieve the standards of effective movement. For example: If you attempt to “hit” with your block, you both tend to root in order to hit hard and to move too far out to be able to retract in time to stop the next attack. 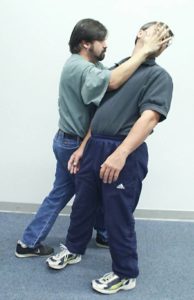 Take a look at this application of angles. Yes it can be a hit (delivers a shock to his system). However, it serves many other purposes. Although it could be delivered as a hit in order to ring his chimes, it is primarily a ‘drive.’ That is to say that it goes past his vertical axis and becomes a push. Notice how his head is being pushed to rotate on his neck (moves that force you along the lines of how your body moves are difficult to resist). The first major effect it has is that it destroys his orientation. Humans are oriented on the 90’s (especially straight in front of our noses). Before he can attack you again he has to reorient on you. If fighting were taking turns (it shouldn’t be, but that’s how sports fighting teaches you to do it) moving him into this position means he “loses a turn.” His next move isn’t an attack, in fact, as you will soon see, it isn’t even a preparation for an attack.

The second major effect is he can’t see you, both because of your hand in his face and because he’s looking the other way. That means he can’t see what you’re doing (which is preparing to drop him like a prom dress). The third major thing it is doing is blasting his balance (and consequently his ability to attack). Before the inmate can effectively attack again or counter, he has to get out of this pickle. For the record, there is a fast and effective counter to this move — but it isn’t what you think it is. In fact, the odds of the perp finding it on his own before he’s taken down is slim to none — and Slim left town. Most people will try to shake their head free of the offending hand or fight back into it(1).

Unfortunately, that still leaves them  set up and vulnerable to the next move, which is for the officer to bring his right hand down towards his left front pocket while turning towards the wall. There are small tweaks and variation that determine how someone will land. In fact, you can control whether the person on their head (in case of a weapons attack), on their back (in case of a hard fight) or on their stomach in a hand-cuffing position (excellent for drunk wrangling). ALL from this one move and everything it creates. In addition, although this photo demonstrates a very simplified version of the move, a left handed slap on back the perp’s right shoulder or a grab and pull of his right arm, puts the officer’s gun behind the perp and inaccessible. He’s going to be on the deck before he can even begin to search for it.

One move has stunned the perp, made him lose his orientation, hides the officer from his sight, destroyed his balance and ability to resist (much less counter attack), protected the officer’s gun and set up an easy takedown for the officer. What did we say before? EVERY move
1) secures your perimeter
2) disrupts his ability to attack you
3) sets up your next move.

Think of effective movement as a shotgun blast. It’s going to hit him with so many different problems at once, he won’t know which one to try to fix first. And while he’s trying to figure that out, you’ve just ended the conflict.

What Effective Movement ISN’T
The engine that drives effective movement is body movement. It is knowing where you want to move/step to in order to achieve the three standards previously given. The challenge is learning where that spot is. And that takes practice and constant checking to see if the move is doing what you want it to do.

A basic example: A block that is executed while just standing in the same location is very likely to fail (2). Whereas a block that is executed while dodging the opposite direction is more likely to prevent you from being struck. It is the combination of hand and body movement that makes it more effective, as your block covers your moving into a better tactical position (This assumes of course you aren’t blocking and ducking into the oncoming blow as many people do, remember your block and body movement are moving in different directions, not the same one).

While this form of blocking does lessen the chances of that particular strike landing, it does not necessarily put you into position to immediately counter-attack. An example of this is blocking while wildly dodging out of the way. Such an action does not set up or enhance your next move. Which means you have to move again in order to be in position to attack effectively. Furthermore, while it stalls your opponents ability to attack for a moment, you are not in position to prevent him from adjusting. You’re standing over there, he’s sitting over there.

Basically dodging out of the way means you both must readjust in order to launch a new offensive, so you both arrive back at that ability at the same time. Therefore, just blocking and dodging to the side, while more effective than just standing there, is still not as effective as we would want our movement to be.

Whereas a block that is executed while moving forward on a slight angle proves itself to meet all three standards of effectiveness. It moves you from the spot that the initial attack was aimed. It moves you off line, thereby increasing the effectiveness of the block while at the same time lessening the demands it must meet. In other words, instead of stopping the attack, it only has to deflect it while you move to a better location (securing your perimeter) But it puts you close enough to your opponent that your body will check his readjustment. This prevents him from reorienting on you to attack again (disrupts his ability to attack). But just as important, you do not have to readjust in order to attack. In fact, your movement into that position while blocking moves you into attack range (sets up your next attack).

These are the obvious examples of how effective offense works, but what about some of the less obvious? By moving into this position while blocking it changes where your block lands. This greatly increases the chances of it both disrupting his structure and being turned into an attack. An example of the former is a karate inside block, now instead of landing on your opponent’s forearm, it is more likely to land behind his elbow. Force applied there is more likely to off balance him or reorient him. Whereas a Wing Chun pak sao (slap block) applied in the same manner easily becomes a grab and pull, further off balancing him (disrupting his structure) and destroying his orientation on you — as he is jerked towards where you were, not where you have moved. In both cases, your opponent can be accelerated into your incoming blow or your blow can accelerate the direction you have started him going.

That is an example of effective movement. If you are going to be moving anyway, why not learn to move where you can get the most results? Instead of doing three moves to develop three effects, you make one move that does three things.

Unfortunately, a full explanation of this concept is beyond the scope of this Web page. Yes, we teach it, and we teach how to develop it in what you do. But the simple truth is, we don’t expect you to fly us out to train you. So we give you these ideas so you can begin to work out how to do them on your own. By taking the definitions given and seeing how you can make your moves meet these standards you can start working towards becoming a more effective fighter.

2)This is incidentally a large source of the “a block is a hit” myth, it is an attempt to compensate for the lack of body movement by “striking.” Theoretically it makes up for your lack of movement, by moving your opponent’s arm. The problem with this is that often it just moves his arm, his body does not follow. Which still leaves him in position to attack you without readjusting.