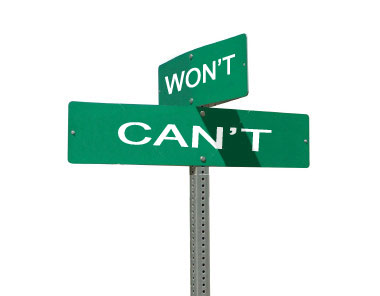 I want everyone reading this to hold up their hand. Repeatedly curl your index finger. If you can do this, you have the physical ability to end a human life.

That completely removes any contention of what you ‘can’t do.’

Everything from that point on boils down to what you are comfortable in doing and the mental/social constructs/limitations you choose to operate within. (Including, if you live in a country with gun control, you following the law or choosing to not own a gun in a country where they are allowed.) Not wanting to do it or not wanting to face the consequences of doing it is NOT the same as not being able to do it. The former is ‘won’t do it,’ the latter is ‘can’t do it.’

There is a growing … contention among certain social justice advocates that women are in physical danger if they tell a man ‘no’ — especially if the guy is trying to hook up with her. Oddly enough, it’s chocked full of all the things women ‘can’t do.’ The apparent physical inability to pull the trigger, drive a knife into someone’s heart or simply say ‘no’ is laid at the doorstep of society and social conditioning.

A growing problem these days is a toxic mixture of

This combo of refusal and entitlement can have traumatic results. There are places and circumstances that you just don’t put yourself into without mentally ‘shifting gears.’ If you go in there with a ‘I can’t’ attitude mixed with a,b, and c you’re dog meat, plain and simple.

Often the response to this fact of life is taken in one of two directions. One, anger and demanding that the rest of the world change (a,b, and c are unquestionably right so society has to change so women feel comfortable saying ‘no.’ ). Two is paranoia. When localized truths are promoted as absolutes and universal when they are proven wrong outside that context, then danger is perceived to be everywhere.

It’s the latter I’d like to address. Dreading the consequences of saying ‘no’ is a brand of this paranoia. It is unfortunately a brand that is growing in popularity — especially among those promoting that women are complete and total victims.

I don’t teach that the world is a dangerous place. I teach the world can be a dangerous place — the trick is to recognize when those conditions have [or are] developing. That especially includes when your choice of behavior and/or strategy is increasing the danger.

Another thing I say is “Muggers are actually pretty rare, but the world is filled with people who will kill you for infuriating them.” Do you infuriate people with your saying ‘no’ strategy? Just how obnoxious and hostile are you when you set your boundaries?

Or are you sending other messages that tell a would-be-bully that you’ll cower at the first sign of aggression?
From an outside perspective — especially if you teach self-defense: If someone is paranoid about a negative response when they say ‘no’ then the first place you need to look is how the are saying ‘no’.

The second place you need to look — and before you do anything from the first — is in what circumstances?
These are components that create real danger — not just the perception. Someone — especially with past trauma — can perceive danger that does not exist. Looking at how the ‘no’ is being delivered and under what circumstances is critical because it gives you real metrics and standards you can use to reduce actual danger.

Physical danger is something a person can do something about (so too is imaginary danger and emotional freak out, but that requires different strategies). Much of what addressing physical danger consists of is changing one’s mindset and behaviors to something more appropriate to the circumstances. If someone hasn’t bought into a,b, and c, this is not difficult. In fact, through out history, people have had a pretty good track record of being able to do it on a daily basis. It becomes pretty easy after you develop certain habits (like looking both ways before crossing the street and not stepping out in front of on coming traffic).

I have another saying. “Train for what happens most and you’ll be able to handle most of what happens.” Now, having said that and the previous paragraph, pay close attention to people who object to the idea of changing behavior and/or circumstances. Whether that is “I shouldn’t have to do that” or why the person can’t do that. That is a red flag indicating a serious investment in comfort zones and perceived limits mistaken for ‘can’ts.’ We’ve also left the realm of real danger and moved into the land of imagination.