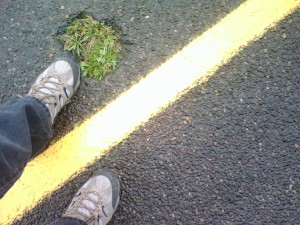 There is a behavior I call “circle straddling’ (although as you’ll see, “line waddling” works too.) Think of a circle of socially acceptable behaviors. Inside that circle social convention keeps you safe. For example, if you don’t say certain things (follow social ‘rules’), you won’t get hit, stabbed or shot (more social rules). Here’s a key point of this, the circle is a two way street. The circle limits behaviors of everyone INSIDE.

Outside the circle, those rules don’t apply. Here is another key component to understanding this behavior. If YOU are the only person outside the circle, you have the power. For example, you can say nasty things to those inside the circle with impunity. They have rules and you don’t.

Wheeeeee! You’re free, powerful and safe to do whatever you want. That is until someone else steps outside the circle. All of a sudden those ‘no rules apply’ is another two way street. Now, you not only risk the person responding to your behavior with like kind, but they may increase it to hitting, stabbing or shooting you for your bad behavior. If you want to continue your bad behavior you’re going to have to crank it up — and take the inherent risks of the other person cranking it too.

This is not so fun.

Often, as a result of someone also stepping out, the person who was originally aggressing (outside the circle) will jump back inside. You may get a Little Bo Peep act. Or you may get an overt “you can’t touch me because of rules” routine. Or you may get some weird combo. The point is ALL of them are relying on the rules to stop you from taking action — especially punitive.

This behavior, once you know about it, is easily recognizable. It’s also pretty ham handed. What’s not as obvious — as well as far more common — is circle straddling. That’s where someone has one foot inside the circle and one foot outside. They’re misbehaving, but juuuuuust not enough to warrant punching them in the face … excuse me, step outside the circle yourself.

But recognize, this is usually a deliberate strategy where the individual is attempting to get the benefits of both inside and outside the circle. That is to say the safety of insider (limitations on the behaviors of others) and the freedom/power/benefits of outsider. Basically they’re trying to creates a one way street. Because they tend to behaviorally ‘dance’ on which side they’re on (shifting weight to each foot) you can see why ‘line waddling’ is also an apt term.

Once you know about this straddle, the behavior becomes obvious. As does possible responses. As the more subtle ones are relying on social convention you can simply choose to ignore it as if it didn’t happen. Know that they’ll usually try to do it again — which reveals to everyone else that they are being the ass. They have to blatantly step outside the circle. This destroys any sympathy for them and the protection of being inside the circle.

Another way, is to noticeably ignore it. They make a snarky comment, you listen, deliberately pause, then calmly continue with a “As I was saying…” Recognize that the power of subtle digs is that they provoke an obvious response. Their power is in shifting the blame/who’s the bad guy/ who is breaking the rules/ over reacted. Someone who reacts to them is the ‘bad guy.’ (Steps outside the circle.) This ‘obvious ignore’ response lets everyone in the room know that you heard the dig, but intentionally chose to ignore it because there is something more important to be addressed. This behavior also shows you are the bigger ‘dog.’ That while you heard it, you chose to ignore it because that person isn’t worth your time or attention. This also sends a message to the circle straddler, that it’s in his or her best interest not to mess with you because… ya know people they can safely get away with pulling this behavior with don’t react that way.

Stepping it up you can “call the ball” on the behavior. This especially if the person is stupid enough to continue waddling the line with little zingers. After their ‘last one’ you stop, look at them and say “You know, I’ve been trying to focus on resolving this, but you’ve been throwing little digs in trying to piss me off. Now if you want, we can escalate this. And I’m fine with that. I don’t mind rockin’ and rollin’* Or we can set that aside and turn our attention to resolving this situation.”

* Alternative (depending on the situation) sentence: If you want to be unreasonable, I’m way better at it than you.

This announces to everyone in the room that you know the individual is straddling the circle. It in essence, kicks the circle out from underneath where he’s standing. The leaves him in a quandary, either move back entirely inside the circle or knowingly step outside the circle with you and take his chances.

Those are subtler ways to handle circle straddlers. The more obvious way … well, let’s just say that it has some problems that come with it. That is basically to kick the circle way back over there and inform the individual that his or her safety is reliant on him/her scurrying back over there. And that continued ____ (name the bad behavior) will result in …. well tell you what. It would be a lot better if they got back inside that circle.

Once you know about the circle, inside and outside and the waddle, it becomes way less annoying when someone is straddling it. In fact, it becomes kind of a smile with a “I see what you did there.”