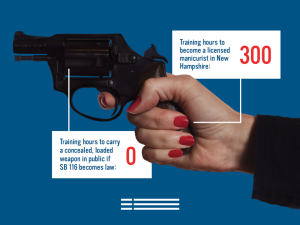 As a self-defense instructor and a court recognized expert witness on violence I have a bit of a problem with this.

First off ask any firearms instructor about what they consider minimum standards of training — especially when it comes to legal issues regarding lethal force issues — and you’ll get a much higher answer than you’d expect.

What also comes as a surprise is how often instructors are accused of being self-serving, greedy, money grabbers trying to milk people out of their hard earned wages.

This, not by the anti-gun position, but John and Jane Q. Public who want to have a gun to feel ‘safe.’ Most people who want a gun, want the gun, but they don’t want to have to pay for training about threat assessment and appropriate response. (Violence is seldom the answer, but when it is, it’s the best answer — the challenge is to know when that is.) Another common objection is to taking the training on how protect themselves from legal and civil actions arising from a shooting.

This brings us to the second point.

This issue is not about guns, but the constant, bureaucratic erosion of our right to self-defense mixed with the societal shift to eschew personal responsibility for our safety. And the corresponding ignorance and fear arising from these. That’s a really big issue.

For brevity I’ll only limit my comments to the erosion of our right to self-defense by the bureaucracy. But to address that fully I need to point out there’s a difference between fighting and self-defense. Starting with self-defense is legal, while fighting is illegal. Notice I said fighting, not abuse, not assaults or other forms of one-sided violence. (Not distinguishing between these is part of the ignorance I spoke of when it comes to violence.) Mutual and consensual assaults over social issues is ‘fighting.’ That is not self-defense. Nor should it be mistaken as such. Conversely, that door swings both ways. Self-defense from an illegal assault (including rape) is not fighting.

Unfortunately, we have a numbers based legal system. Where not only do demonstrable numbers of arrest and convictions dictate the process, but so too does money careerism AND legal indemnification of an institution. This has, by in large, eroded our right to self-defense in the very system that states self-defense is not only legal, but a god given/innate human right. (It doesn’t matter where you think rights come from, both approaches reach the same conclusion.) Starting with officers are faced with unspoken departmental policies of ‘someone has to go to jail’ (Woe unto them if they do not make an arrest) and career prosecutors who (under pressure from their elected boss the DA) functionally do not believe self-defense exists — ever. No matter what, they will try to find a way to convict you. Usually they’ll just go after who they consider the aggressor. But if you have to defend yourself to a lethal level to keep from dying, they’re going to come after you — because remember, “Someone has to go to prison.”

This is why any firearm instructor worth is or her salt is going to encourage people to get as much training as possible. Most people want a gun for the feeling of security it will bring them just having it. Little do they realize that if they ever have to use it, their nightmare is just beginning. And for the record, these are not knuckle dragging, mouth breathing rednecks. The fastest growing segment of gun owners are career women who have gone through a divorce. Firearm ownership is much more than having a talisman that will sooth their fears of the dark, but that’s how many people who are buying guns these days think. Like I said, the people buying guns aren’t ignorant wretches but the women who work in your office.

Third point,, A fundamental difference between pro-and-anti gun camps comes not from the vision of a one-sided assault — especially armed against the unarmed. That vision is in fact, shared territory.

The difference is which interpretation one has on it. Those of the anti-gun position imagine innocent victims (possibly themselves) helpless before the armed might of an aggressor. This is the source of ‘take away guns from aggressors.’ The pro-gun stance also imagines one sided and armed aggression, but responds with a vehement ‘Oh hell no!”

Fourth point, it’s not an armed person who is the problem. It’s an armed aggressive person. That is a distinction that anti gun folks tend not to make. Where as pro-gun people do. With that in mind we come to a fundamental difference in strategy. The question is which strategy is most viable in the long run. Making everyone equally weak and vulnerable so the aggressive can’t do that much damage or try to strengthen everyone so they can deter the aggressive from targeting them and the ones they love?

Which one you believe is the better strategy is a very important question to answer. How you answer it is indicative of how you will approach this subject.

And for the record, mine is the voice of ‘reaching across the aisle.’ How do we reconcile with our fellow citizens about rights on both sides? How do we find a way to negotiate and compromise instead of spit anger and hate at each other?