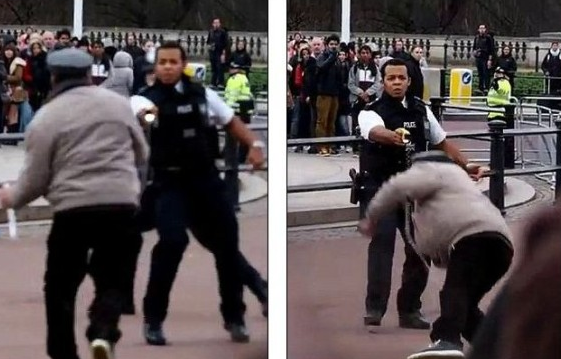 Commentary on the article below.

This Is How UK Police Stop Someone With A Knife

Some points about this. One, the cops had secured the area (arguably containing the threat).

Two, the guy was disturbed, not attacking.Three, those two points allowed for discretionary time. (A wonderful concept and process, because among other things it allows you time to get other options — like a fuckin’ taser)Four, the cop acting nonchalant hid the taser from sight and set up the attack The crazy dude didn’t know he was being set up so he didn’t react violently. Literally this — not the technology — is what made this a viable strategy.Five the cop ‘shot him in the back’ (again, reducing the time crazy guy had to assess what was happening and decide to attack)Six, the nature of the crazy guy’s behavior was more threatening violence than actually attacking. Important because violence overwhelmingly comes with instructions how to avoid it — even from crazy people. When he was first hit with the taser his reaction was more threatening than an actual attack (although it’s possible he was waving the blade to clear the wires)Seven, when he finally did get around to trying to attack the officer – well let’s just say electricity is faster.Eight, where I think the cops ‘goofed’ is their lack of polearms. While I’m sure there was a lethal back up, that’s not necessarily effective for officer safety. Had that guy spun and attacked when the barbs hit him, we’d have a chopped cop. This even if the shooters opened fire.Remember that discretionary time? If you’re going for non-lethal (although less than lethal is more accurate) yay team! But you need to have something lined up to keep the officer safe if non-lethal doesn’t work (which sad to say does happen.*) Even if another cop had a push broom it could have been used to hold the guy off until the lightening took effect. Or kept one’s fellow officer alive long enough for the shooters to influence the outcome.Am I for non-lethal measures if possible? Hell yes. But look at the the circumstances when they work instead of just assuming they’ll work all the time. Or that you’ll have time for them.* Let’s say that there’s a 20% failure rate in certain circumstances of non-lethal means. Here’s the thing about that. The people who are demanding the police ALWAYS use them, would not themselves volunteer for an assignment where their chances of dying were two out of ten — so where do they get off demanding the cops take those risks?

First and foremost police are safety officers. Their job is to enforce safety laws that keep the biggest number of people safe and able to carry on with their business. Those are the people the police are tasked with protectingIf a situation arises where people can get hurt it’s their job to contain it. Having said that officer safety is a biggie. You can’t keep other people safe if you’re crippled or dead. When the danger is coming from a person’s behavior, that creates a priority list1) The public2) The officer3) the person who is endangering othersCan the situation be resolved without that last person being injured or put into pain? If yes, YAY! If no can we safely use minimum force? If so YAY! If that person is offering enough force that we can get injured, can we safely do something that will incapacitate him without injury? YAY! Bring on the tasers and Yay again! Are the circumstances such that the safest and fastest option to prevent injury or death to others a lethal force response? Well fuck… okay so be it. That’s how shit works out at the sharp end. That is the raw unpleasant truth of what happens when you’re out there. This is incidentally is one of the reasons why you’re told not to put yourself out there. Bad shit happens. Shit that cannot be judged by nice safe middle ground standards.Now some people might throw a wobbler into this public/officer/problem child equation. One form of a wobbler is inserting ‘the department’ or ‘local power structure’ in the list of what the officer is ‘tasked’ to protect. But that’s a can of worms too big to open here, because while it can be a factor, it’s not the only factor.The other wobbler that gets thrown into this is when people insist on the officer’s safety being put last. I personally find this attitude to be particularly offensive and elitist. It is showing a level of cruelty, disregard for human life and lack of compassion that is appalling. In the 2004 version of the Alamo, there’s a scene where General Santa Anna has ordered his officers to basically sacrifice the lives of the troops. When the officers object Santa Anna does a terrifying monologue about how soldiers lives are nothing. They are chickens to be sacrificed. I unfortunately find some strong parallels between people who pride themselves on their noble ideals and compassion for humanity yet have the attitude better a cop, fireman or soldier die than a civilian — no matter what the civilian is doing.