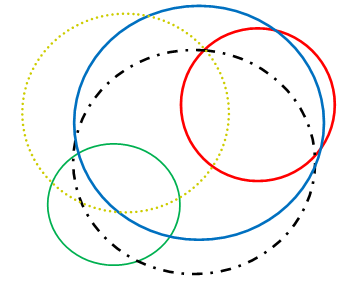 “When I was very young, I remember my grandparents had an older gentleman friend come by the camp one afternoon. Maybe it was me, but I felt creeped out by the guy. When it was time for him to leave, my grandparents told me to give him a hug. I didn’t want to. My grandparents shamed it and told me it was rude of me to not give this man a hug.

I did it anyway. I hated it.

My mother found out and flew into a rage against my grandparents for forcing me into doing something I really did not want to. So, who’s over reaching/under reaching in that situation? It was until later when I was grown up that I understood my mother’s anger.”

This true story illustrates conflicts between different people’s Boundary Setting Paradigms (BSP). A BSP is unique viewpoint that comes with its own set of behavioral rules, violations, and enforcements of those rules. There are at least five BSPs in the story:

These BSP intersect with each other, but they do not align, resulting in conflict.
The Child’s BSP was that she didn’t want to give the Man a hug. Therefore, maintaining it meant not hugging the Man. The Grandparents’ BSP was to fit within Society’s BSP of politeness during social interactions which meant that the Child’s BSP would be violated. The Man’s BSP was that he either wanted a hug, or wanted the appearance of being treated politely to maintain his and Society’s BSP.

The Child’s giving a hug was an Under-Enforcement of her BSP which could lead the Man to believe that he could violate her BSP at will. It is important to note that Under-Enforcement by a child is not a value judgement. It is reflection of her weak social position due to being a child.

The Mother’s BSP was that her daughter’s BSP should be respected. Therefore, violating the Child’s BSP was also a violation of her BSP.

Sounds confusing? It can be. This example illustrates that boundary setting in a societal setting can be a complex interaction between many different Boundary Setting Paradigms each with its own set of rules, enforcements, and violations. Successful conflict management requires understanding the context of these multiple BSPs in order to determine the most effective course of action.

It is common for the media to describe conflict in simplistic terms such as “He was shot over a parking space.” It is unlikely that a person would be shot over the use of parking space. It is much more likely that he was killed over a violation and enforcement of a differing Boundary Setting Paradigm. An argument over a parking space could easily lead violations of a person’s honor code which in turn could lead to the shooting. The penalty of death for honor violations is not new to human interactions.

It is important for a people in conflict to realize that while one may think the dispute is about a certain minor issue, the other may feel it is about some other major issue. In many cases, each party to a dispute sees themselves as the Good Guy verses the Bad Guy.