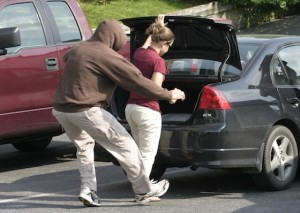 If you are involved in the personal safety/self-defense industry, you will notice a common complaint. The majority of people in the world really are not interested in what you have to sell. Regardless of how important the subject matter is, or that you feel it is, most people do not put a lot of thought in to pro-active personal protection until after some type of personal incident.

In fact, if you look around at people, particularly teenagers, walking around with their nose in their smart phones, it is easy to conclude that people are as a rule oblivious to the dangers of the world. The conclusion is that, they are unaware and easy victims for a predator.

According to popularly quoted statistics, 1 in 4 women will be attacked in their lifetime. Therefore, “women need to stop living in denial and wake up to the risks around them”, you think.

But, how do you get their attention? If you are not using sex, then the next best method is to:

Scare the crap of them! Play upon their greatest fear!

And what are they afraid of? Getting kidnapped, raped and murdered by a predator.

No matter how oblivious the public seems to behave, most women are afraid of this scenario. Most parents are afraid of their child being abducted. And it does happen. In fact, it happens regularly. Therefore, why not get their attention by playing upon this fear, and then provide/sell them some useful personal safety information?

The Benefit of using fear is that you get people’s attention.  Now you can convince them of the importance of looking out for predators, to not be oblivious. To be pro-active about their personal safety.

But what is the Cost? Every benefit has an associated cost. Remember, just because something happens regularly, doesn’t mean that it is likely. Yes, women are attacked by stranger serial predators. But it is also very unlikely to happen out of the blue in most environments in the Western world. Sharks regularly attack swimmers on an annual basis, but it is unlikely to happen.

On the other hand, the lifetime odds of dying in a car accident is 1 in 77. Therefore, it is more likely you will be harmed on your way driving to and from the Mall, then while at the Mall or its parking lot.

What about the 1 in 4 women being attacked statistic mentioned earlier? Well, that statistic is heavily weighted by attacks from acquaintances and domestic partners. The vast majority of women are assaulted by people they know, not by strangers. And when strangers do assault them, most of these attacks are muggings or “groping” of some sort, not kidnappings. In fact, according to Bureau of Justice statistics (Pg. 37), the odds of a sexual assault ending in death are less than 2%.

The cost of using Fear Marketing is that you add to women’s general level of anxiety. You create a constant level of fear of being assaulted in public. According to some studies, 25% of women are taking medications to deal with some type of psychological disorder. Stress and anxiety are a large part of this problem. Women are more likely to be assaulted in private, in a place that they willing went to, by a person they know, and willing went into isolation with, and with either the victim, and/or perpetrator under the influence of drugs or alcohol.

How many of those women who walk around with head phones on and/or stare down at their phones are doing so as a means to disengage from the world around them? How many of them do it as a deliberate tactic to avoid conflict? These women are acting out of fear and anxiety, not out of blissful abandon.

The idea of being assaulted by someone you know, doesn’t pack the fear that a stranger does. Maybe that is one reason that it is more likely to happen. Predators become non-strangers as a means to manipulate unwary prey. Personal safety begins with teaching people to deal with their most likely risk first. Then it continues by expanding the circle of risks to less likely occurrences.

Yes, fearful people make for better customers then people in denial. But, if your mission is really to empower women with knowledge and training, to build confidence and strength, then engaging in Fear Marketing causes more damage than good.

But, if you goal is to simply make money, then Fear Marketing is a proven method for success.