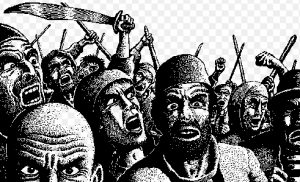 I’m going to start by quoting Chris Rock’s “How Not To Get Your Ass Kicked By The Police.” That is ‘Cause everyone knows if the police have to chase you, they’re bringing an ass beating with them.’

Join me in a little reality break here. You are in proximity of a bunch of young aggressive males who – as a lark — are out beating the shit out of people. Taking off like a scared rabbit is going to set them after you like a pack of dogs. Oh boy, oh boy we got one! Oh boy!

Now mind you, the advice to withdraw is fundamentally sound.

The trick is if at all possible to move away without drawing more attention to you as necessary. If you’re all that tactikool and aware you’ll notice other people have spotted the mob and are ‘hurrying slowly’ to get out of the way. They aren’t ‘running’ per se, but they’re moving faster than everyone else. Yet they aren’t moving fast enough to really call attention to themselves. It’s like watching someone droving through traffic about five miles an hour faster than everyone else and working the holes.

Spotting the marauding pack early enough you can quickly withdraw (with the other non-victims) without painting a target on your chest by crashing through the crowd like a spooked white tail deer. Because if you do that, you will attract ALL of their attention and the hounds will chase. And when they catch you, yeeha and yipeekyaye!

Now if you suddenly find yourself in close proximity of a pack, you’re at a big crossroads. See packs tend to be fast moving, often hurrying slowly through the crowd, but occasionally running wolf-pack to spook prey. The downside of this speed is they can come up on you really fast. The upside is they can blast past just as fast. If they move past fast, let them go. You running, taking a fighting stance or pulling and displaying a weapon is likely painting a target on you.

See we mistakenly think of packs like flocks of birds that do coordinated flight. Birds are very conscious of intrusion into their air/wing space, which is why you get seemingly instant course changes in a flock. One or two birds veer and it sets of a superfast chain reaction resulting in course correction. Thugs playing the knock out game are not birds. Often one will be looking at one potential target, another in another direction, and a third in still another direction. It will be action and noise that gets them all focused on the same target.

Do yourself a favor and don’t be that action and noise that gets them all focused on you.

One guy looks at you, fine. You don’t have the pack’s attention yet. Keep moving. Even if he lunges, if he doesn’t get support (manage to attract the attention of others) odds are good he won’t complete the action. Safety for him comes in being in the middle of the pack. If you flip out and go kung-fu commando on him you’re gonna catch the packs attention and they’ll pull you down before you can Krav Maga the dude into a wet spot. The only wet spot is going to be you.

Movement is ALWAYS your friend in situations like this — especially if it turns bad. But even if you do have to engage remember the celestial chorus so loved by Long Range Recon Patrols, “Break contact, continue mission.”

You don’t fight to win, you fight to blow a hole and escape.

Now the nuances of that strategy is beyond this post, but only engage long enough to get the hell out of Dodge. And this especially if you have a weapon. You don’t need to turn into Shiva the Destroyer’s Weedwhacker of Death and slaughter them all, you need to punch a hole and get out of there.

Staying there means you’re staying in what Sun Tzu called “Bad Grounds” and “Dying Grounds.” You’re open, exposed and it’s hard to move there because of their numbers. It’s time for you to leave and haul ass. This whether it’s a flat foot floogey out of the area or a better, more defensible position. Then — and only then — try to hold your ground. But know you’re pretty well hosed.