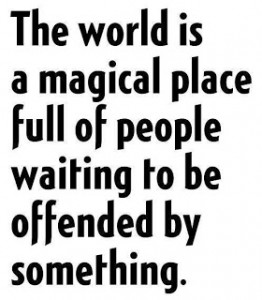 Yes, I very specifically used the word ‘attacker’ in the title. That’s because when you strip away all the ideology, humanism and pseudo-sensitivity, certain people use being offended as a flat out act of aggression.

First a list of foundational yada, yadas. Humans are social primates. We’re designed to function in groups. A big part of this is empathy for and cooperation with those ‘inside’ our group. Since our ‘survival’ is based on the support and cooperation of our group, pretty smart design that. But, those same considerations to those outside our group? Not so much. In fact this can go so far as to ‘othering’ people, but mostly we just don’t give a shit. This:

1– is an important element of functioning in a city environment
2 — if you can get past humanistic ‘egalitarianism’ caring for our own first makes sense in a Darwinian, ‘survival of the fittest’ kind of way.

Another set of yada yadas. Dunbar’s number suggests we can only really handle between 100 and 250 stable relationships (our circle or group). Past that, we get into shades of ‘you’re not really someone I care about’ and superficial social scripts or interactions. Again, really important in a city environment. While ‘roles’ and scripted behaviors appropriate to that role change, a big part of ‘what’s involved’ is the nature of the relationship. You don’t treat a stranger like a family member, e.g., you don’t kiss a cashier like you do with your spouse upon arriving or leaving. (Here’s a fun look at this and some other issues: http://www.youtube.com/watch?v=3-son3EJTrU )

Final set of yada, yada, yadas. Think of relationships as ‘economies.’ Specifically an exchange of goods and services. In a healthy, long-term relationship, things balance out. In closer relationships the ‘coin’ means very much more than just money. Here is where we loop back to being social primates, empathetic and caring about others — especially in our own tribe.(Again, a fun look into these ideas: http://www.youtube.com/watch?v=l7AWnfFRc7g )

All of that is foundation to point out that there are people, who have learned to gain power over others by exploiting empathy, unconscious social scripts, and relationship ‘economies.’

People who pride themselves on being ‘nice’ are especially vulnerable to this from of manipulation.

A fire alarm warning signal is when someone– who is either a complete stranger or someone you only vaguely know (e.g., on FB) — tries to start an economy by demanding the same considerations, reactions, and behavior you offer to a person you have a deep and ongoing ‘economy’ with.

The alarm gets louder if said person does *not* do so with the strict etiquette protocols that we usually use to deal with strangers — especially if asking for something. While we all have to ask things from strangers, etiquette is a big thing.

A sub-point of this is watch for faux-etiquette. For example, there’s a big difference between a sincere, “Excuse me. I don’t mean to bother you, but the ketchup bottle is empty on my table, may I use yours?” at a restaurant and a sneered “*Excuse me, your cigarette smoke is bothering me. Please move” while outside waiting for your tables. (Hint, politeness is not just in the words, pitch, tone, and non-verbals are important.

Where you not only get klaxons, but flashing lights and sirens is when the economy is started out with your ‘ledger’ already in the red. Not only are they demanding that you exhibit the same empathy, consideration, but a change your behavior that only a person you’re intimate (or have an established economy) with warrants.

But take a look at this from a different direction. Do you really want to start such a relationship? This new economy already has you at a disadvantage. You are wrong, bad, mean, and hurtful. Whereas, these people are being so benign to offer you a chance to be a better person by apologizing and changing your behavior to suit them.

And if you don’t take that opportunity that is the green light for them to attack. I mean full on ‘social harpy’ mode. To vent their spleen about what a horrible, awful, petty, and mean person, who is representative of everything that is wrong with this world. You ‘orrible, ‘orrible, little man you …
So here we have a ‘wait a minute’ question. If you don’t have a relationship with this person why should you give a damn if they are offended? Or, do you really want to start a relationship with someone who the first requirement of that economy is you are wrong?

The answer is most people don’t. And while they subconsciously know this, they don’t want to be as rude and obnoxious as the ‘offended person’ is being. This is why it’s important to consciously recognize that — while it is couched in ‘I’m the victim here’ — often, an offended person is the on the offensive. It’s not that a situation can turn extremely hostile if you don’t give the proper grovels and apologies to the offended party. It’s already aggressive, your not groveling is just the excuse to turn up the volume.

I personally have fun pointing out the social standards and scripts such people are trying to exploit. Something as simple as, “I’m sorry. You don’t know me well enough to talk to me that way — much less ask for me to change my behavior/way of thinking to suit your agenda.’

Why is this both fun and effective?

First because most of the scripts they are exploiting are subconscious.

While we don’t know exactly what is wrong with the situation, we know something isn’t right. “You don’t know me well enough …” points out that they are trying to overdraw on the empathy and consideration economy. As in ‘we ain’t got one yet, so why the fuck should I care about your feelings — especially when you:
1- don’t care about mine
2 — care about your own not only enough for the both of us, but throw in everyone else in the room too.

Second, pointing out they are the ones violating this behavior is like walking over and picking up the dead fish when everyone has been trying to figure out where the stink is coming from and saying, “This is what is stinking, and nimrod there is the one who brought it into the room.”

Now, all eyes are on him or her in a ‘you’re the one who should be embarrassed about your behavior’ kind of way. (Damn, they’re the ones who get to be judgmental about others, not the other way around.)

Third, while acknowledging all kinds of monkey issues and agendas, by remaining polite you’re not allowing your monkey free rein. In other words, your monkey can get it’s licks in, but it’s not turning you into a raging asshole. So everyone else doesn’t see two asshole monkeys.

Fourth, it does a fine job of setting boundaries. At the same time, it shows, “I know what you’re doing. Now everyone else does, too. So knock it off.” And it does so without you coming across like an asshole.

Play this one right, and you’ll not only scare them away (although it will often manifest in their storming off in a huff) but they will steer clear of you.

Often such behavior results in absolutely nothing else happening. But even — let’s say in a work environment — if the person runs off to tattle, you have a defensible (and articulatible) position.

Now granted this advice is predicated on the assumption that you weren’t actually breaking policies, laws, or seriously screwing the pooch.

The idea behind Marc’s and Rory’s Conflict Communications is to provide methods to identify and DETER this type of aggressor/attacker so that physical DISRUPTION or ENFORCEMENT is not needed.