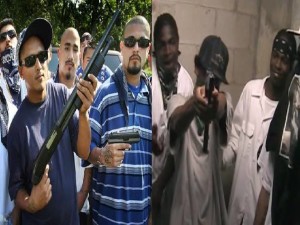 Yes, we have a professional, armed criminal class in this country. The good news is they’re mostly interested in shooting each other.Three points about the numbers provided in the following post.1) Nationally, they fluctuate from year to year (but within boundaries)

2) There is a radical difference between local numbers and national. This is commonly used by agenda junkies to spin statistics (e.g., want to deep six that 90% of murders in Chicago are drug/gang/criminal related? Use national homicide numbers — including Wyoming homicides — that way you can say only 60% of homicides are gang related. Throw in suicide numbers, call them all ‘gun deaths’ and you can say only 20% are…).

3) The CDC reported in 2010 there were 38,364 suicides. (19,392 were by firearms). However, there were (arguably) 718,000 suicide attempts. Even with 718,000/ 38,364 there’s a ratio of 18 attempts to 1 success. I say arguably, because another source I’ve seen reported a questionably high number of hospitals treating nearly 3 million attempts (the latter was an economic source assessing costs of treating self-harming behavior). If you use the 3 million number the ratio of attempted/successful goes to around 78 to 1. I give you those numbers because drugs and alcohol are the means of the vast majority of ‘suicide attempts.’ No problem finding that number. But, you have to dig, dig and dig some more in the CDC records to discover — of those suicide attempts — only 163 were done with guns.

The most reliable way to kill yourself is by throwing yourself in front of a train. However, when people are serious about killing themselves, they overwhelmingly use a gun. Consider the significance of knowing guns work when it comes to killing oneself vs. “a plea for help.” One way or the other, gun or no gun, someone who is dedicated to killing him or herself is going to find a way.