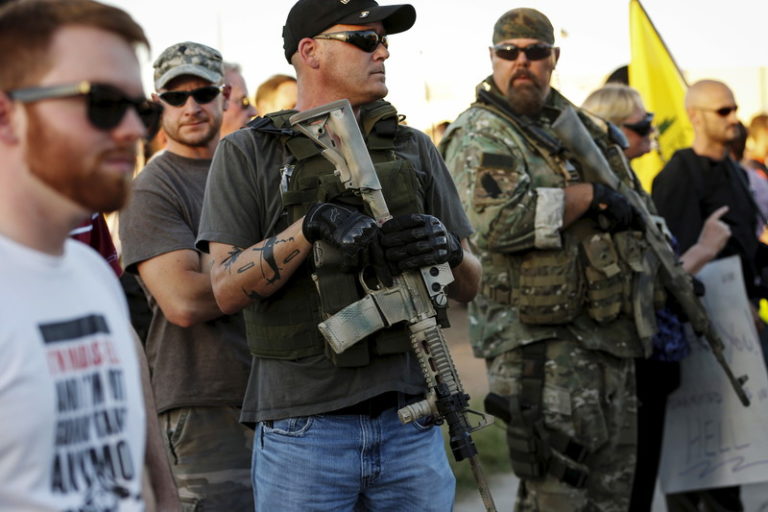 Over the last few years I have been telling people that I was tracking the rise in “Right Wing Extremism.” Now much of it was just tough talk, but there was enough to make me seriously concerned — especially when it was looking as if Hillary was going to win. These guys were gearing up for civil war. (They don’t care the cops have armored vehicles, they have the RPGs to take them out.) I think we took a big step back from that particular cliff when the election went the direction it did.
That doesn’t mean we’re off the mesa yet.
If you’re Liberal, contrary to what you might think you know, these extremist’s hatred isn’t about racism, homosexuality or illegal immigrants. (Although for the record, they are VERY focused on radical Islam.) But in general, these guys have a completely different beef with a different segment of the population. It ain’t your Black, lesbian transgendered, Muslim friend they hate… it’s you.
Until now I’ve been trying to talk to people about “Hey maybe we ought to ease off on the rhetoric and try to talk with each other instead” … or if that’s too much of stretch at least start treating with each other to keep things from going wobbly.
I’ve had limited success trying to be reasonable. A lot of my liberal readers think I’ve swung to the right. (Then they proceed to justify, minimize or dismiss the bad behavior coming from the Left.) A lot of my conservative readers think I’ve joined their camp. (Which I haven’t) While still others think I’m too namby pamby. (The couch warriors mostly) Still other folks think I’m alarmist… some adorable people claim I’m doing it to sell more books.
So with this in mind, I’d like to show you an example of the kind of thinking I’ve been tracking the rise in. THIS IS NOT AN ENDORSEMENT! Nor do I embrace his views or conclusions. However, I do want to warn folks, these guys didn’t just go away when Hillary lost. They are now preparing to go to war with the Left.
A war they’re pretty damned certain the Left is going to start.
Yeah, and bad news to my Liberal friends, these guys actually have a clearer view on the extremists on your side than you do. (Look up Horseshoe theory.) They’re seeing things about the extremists on your side you don’t — or are deliberately denying. The attached article is about how much of a threat the extremists on your side is going to be to them. What these nutballs don’t have is a clear way to tell the difference between you and your side’s nutballs. And quite frankly, I’m not sure these assholes care to. Or at least they care about the same amount as the assholes of your side do. Neither option should make you comfortable. So if I may be so bold to suggest you might not want to be quite so aggressive with your compassion and condemnation of everyone who thinks differently than you. If you know anybody who is pushing hard, try to pull them back and get them to ease up. Because there are looney-toons out there waiting for them.
Having said that let me turn my attention to my conservative friends.
These are the assholes who are scaring people into the believing the right wing will hunt them down and execute them in the streets. Which hey, given this guy’s words is an understandable fear. When folks on the Left look at the right, this is what they think they are seeing. So if I may be so bold to suggest, maybe you should lighten up on the insults and condemnation of everyone who thinks differently than you. And yeah, see if you can put a leash on your more extreme friends.
Because whether you’re Right or Left, this guy is painting a picture of what can happen if we don’t start talking to each other and neutralize the nutjobs on both sides. Me, I prefer that we start talking to each other instead…
https://mountainguerrilla.wordpress.com/2017/02/07/skull-stomping-sacred-cows-reality-isnt-nice-its-a-2×4-to-the-teeth/