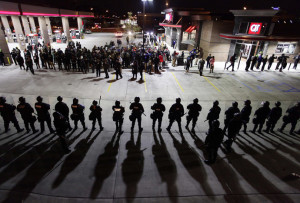 Let me blunt and to the point. If you’re a middle class person and don’t trust the cops you’re an idiot. Odds are good you’re jumping on the “Oooh let’s be a social justice warrior” bandwagon. (A reframing of ‘wasn’t it cool to be a 60’s radical chic, let’s do it again’). Given Ferguson and NYC I find it funny how many in the black community are complaining about all the protesting honkies who are getting in the way of their ‘message.’

Well straight up that ‘message’ ain’t all that accurate in the first place. More than that, it’s not exclusive.

Not too long ago I talked about a certain kind of white people who fit the modern definition of racists to a T — except one small problem, they aren’t racists. They are contemptuous, mean and oppressive to everyone equally. And their actions will screw everyone who isn’t in their socio-economic class equally and regardless of color. While what’s behind this is mostly money, I’m not talking the 1%. What I am talking about are people who roam the halls of power. This whether it is corporate America upper management, lobbying, academia, bureaucracies,  politics or– sad to say — our legal system. It isn’t racism, to them everyone else is a) if you’re lucky, a servantb) in the middle, a resourcec) if not lucky, an impedimentI say this because all the complaints people have about having encountered racist behavior. Newsflash, I’ve been treated with the same contempt and distrust from these folks. And I’m white. (We’ll set aside how often I was treated poorly in ethnic neighborhoods for being white — which to me, is the old school definition of racism, “hating someone just because of their color.”) If you’re talking about the new and improved definition of racism (e.g. Stokley Carmichael’s Institutional racism and systematized racism)this is it. Except again, it’s not about skin color. They treat everyone not of their social class like shit. (I’m not sure if they even like each other all that much.)

But let’s look at the waters they swim in. Ours is a system based on numbers. How much do you produce? How much money did you save the system? How much money did you make for the system? This not only to keep your job, but to get promoted. Mix in careerism and things start getting ugly. The only measurable results are numbers.How do you get those numbers? How do you advance? Well if you’re up high, by making policies favorable to those goals. What if it hurts people? Who cares? Look at the numbers!But what about people who aren’t?

There’s a little known aspect of the Holocaust. That is the Jews in the death camps who stayed alive by running the gas chambers and incinerators.  This is the ultimate, throwing other people under the bus. You do it so you can keep from going in there yourself. I’m going to propose that when people are put into a position to enforce bullshit rules or lose their jobs, the bullshit shall be perpetuated. And if you’re on the receiving end of it, it’s going to suck — again, regardless of what color you are.

I will also argue we have made two very, very bad directional changes in policing. And these changes come not from the patrol officers, but both upper management and the government.

1) Using policing as a form of revenue generation/ revenue protection

Wait a minute, how about we look at the economic realities that made selling blackmarket ‘loosies’ a way for him to get by? I recently had a friend tell me about the taxes in NYC — especially ‘sin’ tax — being so high the cost of a sixpack of Miller was $18.99.  I’ve ‘heard’ the cost of a pack of cigarettes is around $8.50 before sales tax.  What? For 20 cigarettes? (That’s basically .43 per cig and then sales tax?)  So if Garner’s selling cigs for a buck a pop – because another poor person can’t come up with $10 for a pack, but can come up with a buck — he’s making $10 a pack. How many packs an hour? Don’t know. But that’s a nice supplement to any disability payment he’s getting. Most of all though, other people who are in the same economic crunch as he is can get their smokes. Whether you call this ‘just trying to get by’ or blackmarketeering, it works.

But, and this is where things get rough, the shop keepers who are forced to pay these taxes are getting screwed. Because they have other costs than just taxes on cigarettes — such as purchasing the products to stock their shelves — utilities and rent, this loss of revenue hurts.  A serious problem is when city and state governments decides small businesses are the ones who should bear the brunt of taxation. (California has driven way too many businesses out of state.) So if you play the game straight, you’re damned right you’re going to call the cops on someone selling loosies in front of your store — that fucker is taking bread out of your mouth. People forget that –despite the video guy’s claim that all Garner did was break up an altercation — that it was the store owner who called the cops on Garner.

But let’s take it up the chain.  It turns out the blackmarket is a known problem. You raise taxes or make things hard to get and people find ways around it. Your policies and demand for revenue have created the conditions for a blackmarket. So you pass laws to keep them from doing an end run.  Those laws mostly protect the income stream of those who haven’t dropped out and are still paying you. Because if they can’t pay you, you get no money.

Over the years, bright boys in government and bureaucracies have figured out that law breaking is a good revenue stream. For example, the parking meters in downtown bring in lots of cash. But tickets, towing and impound fees dwarf that income. Can anyone tell me what the fine is for selling loosies in NYC? Amazingly enough Mr. Garner had apparently paid those fines 30 times. Garner may not have been a tax payer, but he was a revenue source.

Bottomline what Garner was doing was a crime. Granted it’s a crime because the law was passed to protect revenue streams, but that doesn’t mean it’s not a law. It’s a bad law and the place to fight bad laws is not in the street, but in the courts. But now the bad news, the courts have a vested interest too. Which brings us to our next problem.

Removal of officer discretion. ~sigh~ You know all those horror stories of the Civil Rights movements about brutal cops, victimizing, killing and arresting people on bullshit charges? Well, we’ve swung to the other extreme. This is not to say those days were all beer and skittles, but we’re face a problem today from the solution of yesterdays problems. In shutting down these horrible cases of bad decisions, we’ve thrown the baby out with the bathwater in prohibiting officers from making good decisions.

These days, we’re facing both legally required mandatory arrest and administrative/government/politically pressured arrests. This for a number of reasons beyond the scope of this piece. But know this in layman’s terms: If an officer is called to an incident, there’s going to be hell to pay if he doesn’t bust someone. If no arrest is made, he had better had bullet proof reasons, why.  This also includes the elephant in the room of quotas. Write tickets to make the city money. What you may not know is how this really kicks into overdrive when

a) there’s a budget shortfall,

b )someone is trying to get re-elected on a tough on crime platform (look at these numbers! See how good I’ve been!)

d) there’s egg on the face of the department about ‘letting things happen.’

In this kind of environment there’s very much an attitude of ‘someone’s got to go to jail.’ But it’s not from the patrol officers, it’s from above. What I’m trying to say is it’s not the cops that are the source of these problems. Straight up, many of the problems we face aren’t because the powers that be are having to hold the police’s leashes, they’re the ones who are sicccing the cops on folks by demanding police enforce economic laws that criminalize things that threaten the income stream. Look at what happened with Garner in that light and you get an entirely different perspective.

Then you have whole chunks of society for whom breaking the law is way, way more than just getting by. A fair number of these people feel it is their right because of anger and past wrongs. So on that front, there’s a lot of bad behaviors on both sides of this issue.

Is there a degree of racism with this problem?  Yeah, sometimes. But the truth is, it’s a whole lot bigger than just race. And by focusing on just that we overlook the bigger systemic problems we all face with how thing are. Because if you don’t have the money it takes to stay ‘legal’ you’re going to get the same treatment, regardless of you color.