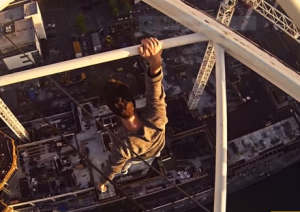 There are countless videos from knife defense experts that show how people to defend from a knife attack. A subset of these videos show the use of simultaneous blocks and counters – one hand/arms does the block while the other hand/arm does the counter-attack. There is no doubt to the impressiveness and efficiency of these techniques when demonstrated. The question is NOT whether or not these techniques are technical achievable, they are for certain people. The question is “are they practical and achievable for average/ordinary people? Those people are “the rest of us”.

There are also countless videos of rock climbers doing amazing feats. A subset of them are “free climbers” who without the aid of safety equipment hang from only one hand hundreds of feet in the air. A slip would result in their their death. Yet, from this one handed hold, they smoothly transition to different positions as they rapidly ascend the cliff. But unlike the knife defense experts, they don’t suggest that their methods are applicable to “the rest of us”. Despite the fact that some of “the rest of us” might be physically talented enough to duplicate the feat, very few would have the emotional conditioning to attempt such a perilous act.

If the average person was hanging on a window ledge high above a city street, he or she would hang on for dear life with both hands. Letting go with one hand to reach out for a better hold on an adjoining fire escape would take an act of supreme willpower. It is more likely that the person would attempt to awkwardly pull himself up while never releasing the two handed grip on some part of the window ledge until in a position of safety. Swinging to the fire escape is certainly more impressive than dragging yourself over a window ledge like a pregnant woman getting out of a pool. But which one is more realistic given that a slip results in falling to your death? The influence of instinct will cause the person to use two hands together.

If someone is stabbing at you with a knife with the real intent to drive it into your torso, is it realistic to assume that the average person would only devote one arm to blocking/redirecting/trapping the income knife while the other hand executed an offensive counter-attack? This is NOT to say that all people can’t do it. But those people are not average people. Just like the Free Climbers, experience has fundamentally changed them. They are by definition, not ” the rest of us”.

Instinct will direct the person to devote his full attention and all available resources to blocking/redirecting/trapping the incoming knife when evasion is not an option. Overcoming this powerful instinctual response is not achieved by practicing with plastic/wooden knives and compliant attackers. This type of training is missing the essential element of real injury and death that it necessary to create the emotional conditioning to reliably override instinct with a trained response.

No matter how well you can swing on monkey bars two feet above the ground, you have not developed the conditioning to do the very same thing on scaffolding on the top of a skyscaper.  Training to accomplish that task takes a systematic raising of the monkey bars from 2 to 10, to 20, to 50, to 200, to 2,000 feet in the air. And with enough time and effort and assuming no fatal falls, it can be done. But how many people are willing to actually do that? Very few.

There is another type of person that may be able to accomplish the one handed block/redirect/trap, these are the ones who are so confident in their ability to be successful that they are actually not afraid. Therefore, the instinct to use both hands doesn’t become triggered. In this case, there is not methodical conditioning to overcome the fear response, there is blissful ignorance of the true danger of the situation. These people believe that doing something 2 feet off the ground is effectively the same as 1,000 feet.

In conclusion, while it is great the some people can deal with blocking/redirecting/trapping an incoming deadly threat with only half their available resources, but what about the rest of us?

There have to be ways to train in almost, but not quite deadly situations. EMTs and military operators are good examples.What I believe happens is that you ingrain the movements the usual way through repetition, but only up to a point. After that we are either lucky or unlucky, when, in the first real encounter, our training works seamlessly, or we catch a break and get up to speed in spite of a bad start, or we get badly injured or worse.Reality is the test of our training.What we are all still trying to figure out is whether or not what we are learning will apply to real life. We only find this out when something we are training for actually happens. So the trick is to query people who have trained for knife fights, and then actually had to use their skills – but not because they caused the altercation, which means they were prepared.The problem is that most people’s perceptions of events are faulty…. that’s a nice way of saying we all lie to make ourselves look good. This is such a big question and such sacred ground to be treading on! The people who need to consider this won’t. They hold their training and instructors in such high regard that it’s like questioning god and country.I still hold that the definition of words like patriotism and love is that they are verbs. Words that require thought and activity, not blind, immobility. It is in the act of examining that we improve the things we love. Stagnation is rarely the way to go. But try telling that to someone who grew up in one style and has been drinking the coolaid ever since. Or who has never been part of a group or was bullied and is now an instructor. How do you get the knowledge where it needs to go?!After some years of Kali, I feel I know how to use a knife against someone else quite well…. The question is will my offense do the trick in terms of defense? I have trained in slow mo against live blades and full speed without getting “cut” by a metal training blade (and also getting cut!). But this is also against other people using a blade in the same familiar way…..In movies people proudly display their knives and then slash multiple times….. in reality, if someone wants to kill you you will never see the blade.The REASON for the fight will often dictate whether your training will work. You don’t need knife training if you are trained to spot a problem in advance and avoid it. And if a knife comes out of no where your health or reaction time might be more help than any actual knife skills.That space in between where you are facing off against a knife wielding attacker is rare unless you frequent certain bars in certain hoods, or possibly if you are a woman held at knifepoint. But that might be less of a knife fight and more of a general question of what you have available, the element of surprise, and how well you control your fear.Then we could get into drills… a necessary evil? But enough for now!