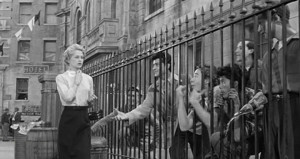 No discussion on street harassment is complete without an examination of the role of male bystanders. In this case, the bystanders are defined as being neither participants, nor friends or associates of the harasser. The bystanders are strangers with no ties to either the Target of harassment or the Harasser.

The question of why “no bystanders, especially men, took any action to intervene during or after an incident of harassment” is quite common. The typical feeling is that the male bystanders either don’t care or are afraid to get involved. This answer has some fundamental truth, but it avoids the deeper questions of “what will make the bystanders care more, and what will cause them to overcome their fear, and thus get involved.”

Most people have very little awareness of what is going on around them. Particularly in respect to other people. Looking doesn’t mean “seeing”. Seeing doesn’t mean understanding. The Target of harrassment knows the full story of what transpired, but it is unlikely that the bystanders do.

It is important to examine the event from the male bystanders’ prospective. In general men need a concrete signal that their intervention is needed and wanted. They need to have confirmed in their mind that the Harasser has bad intention. And even after they have confirmed the Harasser’s bad intention, they need a trigger event to cause them to act. Without these elements being present, most likely the bystanders will remain in the internal indecision loop of deny, delay, and do nothing.

What also needs to be understood is that while a situation that requires bystander intervention may seem incredibly obvious to a woman, it may seem harmless to a man. The man may perceive that the Target is in no immediate physical danger, therefore there is no need for him to intervene. The Target on the other hand, may feel threatened and is looking for both moral support and physical backup.

It is very easy for a male bystander to take the position that “whatever happened” has “already happened”. Therefore, it is too late to do anything about it anyway. The Target on the other hand may be looking simply for a confirmation of her feelings about the inappropriateness of the behavior from the bystanders.

Male bystanders are more likely to intervene in a situation of street harassment when the Target of harassment makes it clear as to what has happened, why it is a problem, and that bystander intervention is desired. This information will provide the male bystander with confirmation of the Harasser’s bad intention along with the trigger necessary to cause him to act. This information can be provided by an assertive statement from the Target directed to the Harasser stating “Stop harassing me. I don’t like it.” This statement is actionable information and removes a large number of uncertainties.

On a personal note, I believe that the statement “Stop harassing women. No woman likes it.” is less likely to induce male bystander intervention. I feel the reason is that this statement is more of a general reprimand. The Target seems to have the situation under control. Therefore, maybe no male intervention is needed or desired.

In any case, the two main uncertainties that remain are what exactly should the bystander do, and will his intervention make the situation worse? The first one can be eliminated by an additional command from the Target to the Harasser such as “Leave me alone!”, Move away!”, or “Back off!”. The Bystander now knows that his role is to physically create a barrier between the two, or to add an additional supporting command of his own such as “You heard her, move away from her!”

We are now left with the final uncertainty. The one that all harassers depend upon to keep both targets and bystanders in fear. It is the implicit fear that the harasser may at anytime erupt into violence, that the harasser uses to his advantage and it enables him to gain power and control of the situation initially.

It is for this very reason that it is important to profile and assess the Harasser in order to determine the likelihood of his escalating the situation into violence. It is not true to say that “all harassers are bluffing” because they are all not bluffing. But, when confronted with an assertive Target and supportive bystanders, many harassers are bluffing. But some are not. When confronted in this manner, the Harasser needs to make a choice, he can either escalate the harassment to threats and violence, thereby risking an angry mob of bystanders, incurring criminal penalties, or he can back down.

In the event the Harasser backs down, the Target has succeeded in controlling the unwanted behavior. Both the Target and the Bystander need to disengage from the situation. Over-intervention on the part of either the Target or Bystander may change the dynamic of the situation so much that now the Harasser is the one that feels threatened and reacts. This type of situation should be avoided. It has the very real potential of escalating into violence.

If the Harasser does not back down when faced with both an assertive Target and Bystander, the Harasser may be an Overgrown Bully, Anti-Social Intimidator, or worse. This type of person is comfortable with the use of violence to gain advantage. Therefore, the Target and Bystander need to jointly disengage and exit from the Harasser in an orderly manner. Upon creating a safe distance, it is an excellent opportunity to alert the police as to the nature of the incident.

In summary, male bystanders are not necessary uncaring or afraid. They may simply be uncertain as to when and how to proceed. If they are provided with clear indications and directions, it is much more likely that they will intervene on behalf of the Target in a situation of street harassment.

Man gets brutally attacked for attempting to stop catcallers