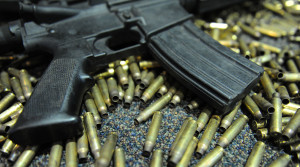 I’ve long maintained that the deaths from mass shootings are ‘statistically meaningless’ (i.e., too small of a number to make up for variables, glitches and finagling in the process getting the findings.)As such, you can’t make any major assessments/predictions/ extractions of relevant data about general subjects from them — other than these anomalies happen within the larger field. (The contrast with the big picture is important)The bigger you pump up the larger field’s number, the less significant these numbers become. For example if you are talking about homicides (committed by people other than law enforcement) in the US in 2013, the reported numbers are 12,253https://www.fbi.gov/…/expanded…/expandhomicidemain_final8,454 were by firearms — all types of firearmshttps://www.fbi.gov/…/expanded_homicide_data_table_8…Incidents where it was known to be a pistol were 5,872(ibid)Using this US today article EVEN if we roll in family murder/suicides in shootings you only get 93 deaths from multiple shootings.http://www.usatoday.com/…/mass-killings-data-map/2820423/Doing a fast scan, public shootings tend to track with drug and gang violence. Which give us 33 dead. However, the ‘other category’ tracks 29 deaths in what we would deem mass shootings, rampage killings or active shooters scenarios. 29 out of 8,454 homicides with guns. (Yeah, that’s a big trend there </ sarcasm >)As always it’s more a matter of categorization issue than hard and fast numbers. For example the Santa Monica College shooting started as a domestic and then went into active shooter mode. So is that a family killing? Public killing or other? How these things are categorized is the first question you need to ask. Also the above numbers often don’t include when the shooter is killed or killed himself in the tallies. (A common trick for inflating or decreasing numbers.)Still 29 or 38 — as the original jpg says — in comparison to 8,454, that’s an incredibly small percentage. And not really enough to get any significant trends regarding violence in general, or even shootings.Now if you micro it down to just the subject of mass shootings THEN you can begin to get significant numbers. Like how many mass shootings did the shooter use pistol, shotgun, rifle or some combo?But even then realize the numbers can be shaky. Be aware that in small numbers of incidents just one more event can have big sounding results For example (hypothetically) if we only had one mass shooting in 2010 and in 2011 there were two, that would be a 100% increase.(This from a page explaining how this works: The reason is that when using percentages we are referring to the difference between the final amount and the initial amount as a fraction (or percent) of the original amount. So, if something gets multiplied by two, it experiences a positive increase equal to 100% of the original amount.) 100% increase sounds impressive doesn’t it? Until you realize were talking one mass shooting vs. two the next year.Not to make light of the loss of life and the families’ pain but deaths from mass shootings are drops in the bucket of firearm homicides and drops in the ocean of the 2,596,993 deaths in the US (reported by the CDChttp://www.cdc.gov/nchs/deaths.htm )And the number of incidents of shootings where 4 or more people were killed (family killing, robbery, public and other — in the USA Today chart) top at 25. Stop and think about that for a second…25 incidents in comparison to 1,163,146 violent crimes reported to the FBI in 2013. How significant is 25 incidents in comparison to over a million violent crimes? (And remember, that’s only the reported violent crimes.)https://www.fbi.gov/…/violent…/violentcrimemain_finalI don’t particularly like statistics (preferring the raw numbers). But ANYTIME someone starts using statistics — even if you agree 100% with the message — always keep in mind the information contained here (How to Lie with Statistics).http://www.horace.org/…/How-to-Lie-With-Statistics-1954…