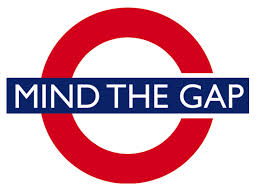 It’s a simple statement: Between stimulus and reaction there is a gap. Ordinarily we blow past this so fast on our way to our habitual response we don’t even recognize it’s there. Controlling that gap and allowing yourself other reactions than the habitual ones is freedom and power. So Mind the Gap.

So I say that and people ask. How do I do that?Such a simple question, but before you can do it you need to know a few things. Here is a precursor (or if your academically minded, some course prerequisites)

In helping you first to recognize the gap I’m going to talk about sex.

I once read from someone that when we first meet people ‘copulation is on our minds.’ In a very primitive part of our minds when we look at people one of the first things that goes through out brains is “Sex yes? Sex no?” This is actually a very important fork in the road about our behaviors. Thing is we blow through this fork in the road so fast we don’t even recognize we’ve done it — much less how it affects our behaviors. Surprisingly the answer is overwhelmingly ‘no.’ Enough so that we only recognize this fork/reaction/process when the answer is yes.

Let us for sake of ease assume you’re mono in your sexual preferences. Whether homo or hetero, one half of the human race is an automatic “No.” Sorry not interested. This automatic no dictates how you’re going act towards that person. In the half that you are interested in there are all kinds of reasons that further rule a majority of people out (e.g. age, health, etc., etc.) Again, automatic no’s abound .

The habit of no is so common that we only recognize the fork when we see someone who is a yes. But even then there comes a whole slew of other reasons to switch that person back over to a no. Such as environment, relationship status (yours or theirs), work, etc., etc. This is basically you look say “Yummy” and then go about your business — because hitting on that person would be inappropriate. So as of now we’ve habitually followed about a 99% no rate. It is extremely rare that we actually act on the yes. And even then, it’s far, far more likely that something is going to happen that will cause things to switch over to no.

This sex yes/ sex no is an example of a gap that we don’t realize we’ve blown past at high speeds. It’s also a fun way to acquaint yourself with how often we react out of habit and without thinking. Next time you’re at the market consciously track the nos, the yeses (but I’m busy and you’re ____ [fill in the blank] so you’re over to no). Remember, this applies to EVERY person you see.

If you mutter to yourself (or say it inside your head) you’ll rapidly see how many times we make these immediate subconscious decisions and how it dictates our behaviors towards others.Moving on to something else.

I make a distinction between reality and actuality. Reality is what is happening inside of us as were are interpreting external events. Actuality is what shows up on security camera footage. This is an important distinction because what we tend to react to is our own personal reality, not what will show up on the video.

The reason and importance for recognizing this difference between reality and actuality is emotions, adrenaline and thoughts are tightly interwoven. And they are supported by habitual reactions.

When we get hit with emotions and adrenaline, what happens is they become our reality. Our thoughts zig down a known and reliable path and our actions follow suit. That is what we do when _____ (fill in the blank). That is also us blowing past the gap and assuming our interpretation (our reality) is what is actually happening. If you want to take it to a certain point, we become the victim, the accuser, the judge, jury and execution all in one. Adrenaline, emotions and thoughts all blend together to create a seemingly unquestionable reality and we react to that — regardless of if it’s actually what’s happening.But more than that, to many people, this reality is an unstoppable juggernaut that we are helpless to prevent. That is how strong this habit is. We feel we are helpless before this tidal wave.An important thing to understand is emotion, pain and adrenaline are motivational messages. When we feel them we feel we have to act NOW! This is especially important when it comes to self-soothing (actions we do to make ourselves feel better). If these behaviors are negative, they might serve to relieve the unacceptable stimuli, but they can — and usually do — create other problems. Often these immediate self-soothing reactions are so habitual we don’t think we have a choice.

That’s where minding the gap comes in. You have your choice of analogies. In the desert you have arroyos. These are deep ravines that have been carved out by thousands of years of rains rushing down these paths. In actual survival terms you want to stay out of arroyos because a rain storm 20 miles away will create a flash flood in the ravine. Thing is if you’re in an arroyo and a flash flood comes there’s no successful strategy in the arroyo. If you try to fight it and resist, you’ll be blown away. If you try and outrun it (along the arroyo) it will catch you and again you’ll drown. The only way to be safe from a flash flood is to get out of the arroyo. You scramble out and let the flash flood pass by. You don’t try to fight the flood of emotions, you don’t try to out run them. You simply put yourself into neutral and don’t do anything until the flash flood passes.

The second analogy comes from bodysurfing in the ocean. Ordinarily waves break in a manner that allows you to either jump over the turbulence or dive under and swim beneath. (Water’s four feet deep, turbulence is in the top two, You’re swimming in the bottom two.) There are however, close outs. That is when the wave breaks in a manner that the turbulence goes all the way down to the sand. You can’t dive under and swim because you’ll be tumbled before the power of the breaking wave.

In these circumstance you dive and swim to the bottom. There you dig your fingers into the sand and relax your body. You let it act like seaweed and the turbulence just passes you by. You just hang on with your fingers in one spot and relax. The wave will pass. Once the water is calm again, you start swimming again.

In either case you recognize that fighting or running from the turbulence/flash flood isn’t going to work. So instead you put it into neutral and let the impulse to act habitually to pass. Once the turmoil is past, then you can start making different decisions other than what the emotions and adrenaline are telling you YOU HAVE TO DO!!!

No, no you don’t have to react that way. When you learn to mind the gap, it becomes much easier.