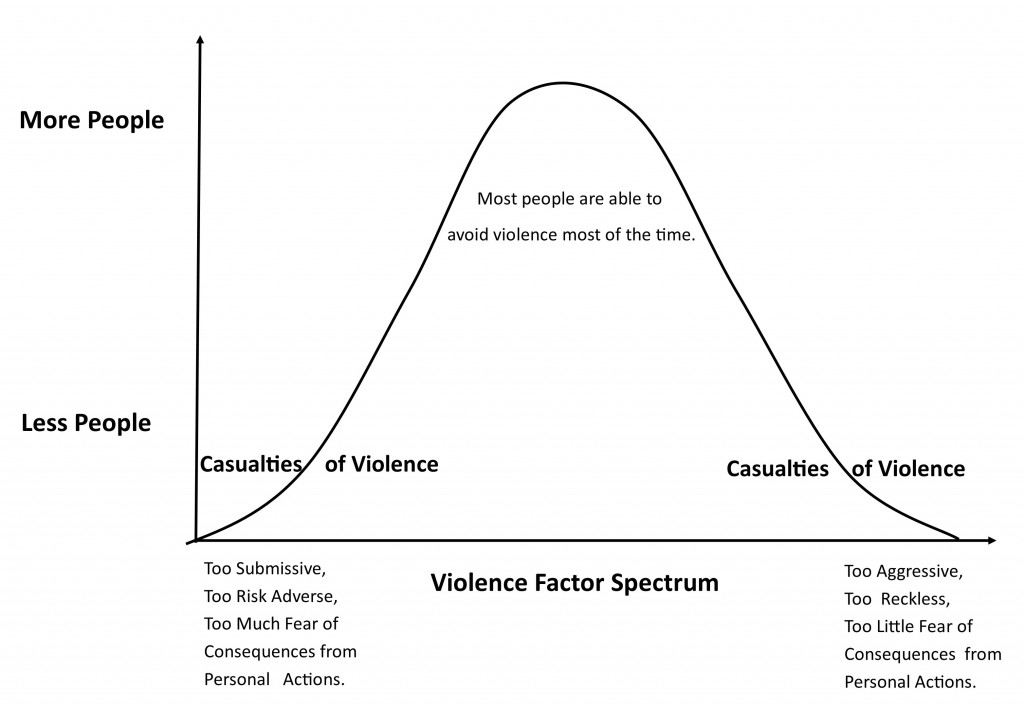 “Don’t be a victim” is classic self-defense advice. It is usually directed towards women. It tells women to walk with confidence when out and about, to be aware of their surroundings, etc. What is piece of advice fails to address is that the most likely Casualties of Violence fall into two vastly different groups.

The first Group consists of people with multiple of the following Factors:
– Overly submissive
– Overly risk-adverse
– Overly fearful of negative consequences from their actions.
– Under confident
– Under assertive
– Under protective
– Unlikely to speak up for themselves.
– Easily threatened and intimidated.
– Overly trusting of other people.
– Under reactive.
– Too slow to take action.

Members of this Group are statistically the most likely to be assaulted and/or abused, usually by someone who they know. Demographically, this Group has a high percentage of people with disabilities, homeless, runaways, young girls and boys, teenage girls as well as other lower status social classes.
The next Group consists of people with multiple of the following Factors:

– Over aggressive
– Overly reckless
– Minimal fear of negative consequences from their actions.
– Over confident
– Over domineering
– Overly protective
– Very quick to speak up and voice their opinion.
– Use threats and intimidation.
– Overly suspicious of other people.
– Over reactive and impulsive.
– Too quick to take action.

Members of this Group are statistically most likely to either die or be seriously injured by violence.
To put it another way, the First Group has too much Yin, the Second has too much Yang. What keeps most people out of the Casualties of Violence Class is a balance between the opposing Factors.

Yes. I am saying that most people actually get it right when it comes to avoiding being a casualty of violence.
Here is an example. Every year about 1.6 billion people ride the NYC subway system. Using rough math, and assuming that each rider encounters 100 people in close proximity on each ride, there are 106,000,000,000 human interactions. Out that number, there are around 3,000 felonies per year. That makes one serious crime per 35,333,330 interactions. This number confirms that most people know how to avoid either engaging or being victimized by violence in common everyday situations.

The risk of becoming a Casualty of Violence goes up dramatically for those with the Factors previously described.

See the Goldilocks Law of the Inverted U-Curve