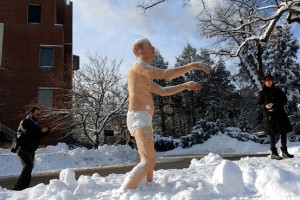 Referenced Article Caption: A life-like statue of a guy sleepwalking in his underwear awakens a protest by campus feminists.

My problem with people who squeal about ‘triggers’ is two fold.

One. I don’t like the term passive aggressive, because way more often it’s aggressive-passive. I call it ‘carpet mold aggression’ because of a common (and easily recognizable) strategy.

This is a hijacking of a normal social dynamic. That is you say or do something and the person says ‘Ow” Oops sorry. An example is accidentally stepping on someone’s toe. Being a good person, you apologize and watch where you step. Except, toes have a knowable and see-able physical existence. Feelings don’t. That’s part of the problem.

In normal circumstances, these social ‘ouchies’ are worked around and people keep on going. However, to the aggressive passive/carpet mold aggressor (AP/CMA) that small concession is a green light.

Now through a process of creeps and encroachments — and very much like growing mold — these ‘ouchies’ begin to cover the floor. At first it’s just having to watch where you step, but eventually you’re crowded into a corner where you can’t step anywhere without hurting the AP/CMA’s feelings.

And god forbid you want talk about your feelings or needs — especially if it’s about you getting pissed about being crowded into that corner by the tyranny of the other person’s feelings. While the AP/CMA person plays the helpless, weak victim card REALLY fast when confronted by a person willing to aggressively stand up to them, the AP/CMA person has NO problem with turning into a screaming harridan when someone they’ve cornered tries to push back (And harridan, in this case applies to both sexes). When they think they can get away with it, they have no problem being verbally and emotionally violent.

I demonstrate this AP/CMA dynamic (and how to resolve it) by a series of demonstrations, the core of which is me accusing someone of crowding me and infringing on my personal space. All the while I am constantly creeping forward in small baby steps.

Problem two with people squealing about triggers is twofold.
a) No fucking economy (why should I care?)
b) Way too often, they ain’t being polite and trying to find compromise — they’re attacking.

Our Fear of Conflict (or ‘be polite’)

#1 Don’t walk up — as a complete stranger– and start hitting me with demands
#2 Give me a reason (e.g., establish an economy with me) that will give me reason to consider your feelings. Giving me a chance to be a ‘better person’ by letting you get away with being an aggressive self-righteous, spoiled brat demanding that I change my behavior to suit you is not a strategy that’s going to work well with me.

Here is an example of how some people use their  “triggers” as a means to control other people’s actions.