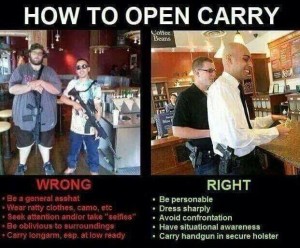 For the record, I’m not a fan of generalized open carry for a number of reasons (starting with the whole ‘shoot me first’ aspect and ending with ‘don’t scare the civilians’). But if you’re going to do it, this is a pretty good list of suggestions.

This is my response to folks (elsewhere) who were going “mah right” “criminals go after soft targets,” “Bullshit on shoot me first.”****Ummm folks. No criminals DON’T always go for the soft target. There is a thriving black market trade for firearms taken off the unconscious — if not bodies — of armed security guards. Usually they do, but be careful of painting a target on your chest. Add to that having been a bodyguard, not all attacks are going to be from criminals. Being aware of the ‘shoot me first’ factor comes from personal experience of not being the primary target, but being targeted first because the attacker knew I was armed. Having bullets whip past you in a civilian context kind of teaches you a few things about how crime and violence happens.Then comes the issue of having learned a thing or two about being constantly armed — whether legally or not. I’m originally from California where even to this day ‘good luck getting a concealed carry permit’ (I knew several people involved in the class action suit against Los Angeles refusing to issue. They were bodyguards, private investigators, process servers etc.)Choosing to be armed among people who choose not to be is a study in rights. Both of your rights. It’s having the choice that is the right. Working out the day-to-day details is not a matter of rights, it’s more a matter of manners and common sense. And that includes how much time you’ll spend talking to the cops because of other behaviors than carrying a gun. Remember folks, ours is a complaint driven system, if your behavior while carrying a gun prompts people to call the cops, the boys in blue will show up to have a chat. And all it takes is a citizen to be scared for that call to be made.Finally, I’ve said it before, I’ll say it again. We are in a PR war against the anti-gun crowd. We’re never going to change their minds. The opinion and good will we are fighting for come from two places.1- People who don’t own guns but aren’t anti-gun2- Our FELLOW gun owners. This may come as a surprise to you but I know lots of Democrat gun owners. I know a lot of women gun owners. I know a lot of Black gun owners. I know a lot of Jewish gun owners. I know a lot of Mexican gun owners. I know gay gun owners. The list goes on and on.News flash about the second group, they’re just as scared of criminals as anyone else. (Hell, even the criminals are scared of other criminals — more so than the cops and armed civilians.) They own firearms to protect themselves — usually at home. And they’re perfectly find about their choice to leave the gun AT home.So the advice in the meme of ‘Don’t be an asshat’ REALLY needs to be thought about long and hard. Because it pushes non-gun owners and even other gun owners into if not voting for, then not fighting against gun control.Oh and BTW, I also have experience fighting against my city’s ban on open carry. (We won.) It tickles me pink when I see someone walking around town openly carrying and being personable etc., etc. It helps ease the concerns of those who voted against repealing the unconstitutional municipal code.