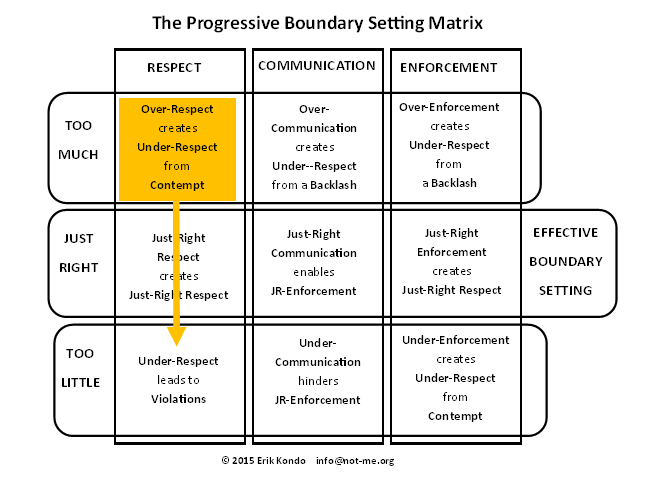 It takes giving Respect to receive Respect. That is a commonly used phrase. It makes sense. If you are not respectful to people, they are unlikely to be respectful to you in return. But what if you Over-Respect them? It is possible to give someone too much Respect?

Respect is considered to be such a universally desired quality, that the idea of giving too much Respect is rarely considered. Over-Respect comes in two basic forms. First, there the type that is described by the words: Awed, Idolize, and Glorify. This is “Impressed Based Respect”. In this case, one person puts the Respected Person high on a pedestal. The idolized person can do no wrong. But rather than generating reciprocal Respect, this type of Over-Respect usually creates feelings of Contempt in the Respect Person.  Contempt is a form of Under-Respect. Contempt is an emotional response, it doesn’t depend on logic to be created. The end result is that Over-Respect creates Under-Respect.

The other type of Over-Respect is described by the words: Intimidated, Browbeaten, Bullied, Cowed, Daunted, Frightened, Pacified, and Submitted. This is “Fear Based Respect”. In this case, the Respected Person is essentially feared by the other. But what makes it Over-Respect is that the fear is not necessarily warranted for the situation.

What both of these types of Over-Respect have in common is that the Over-Respected person has significant power over the other person. This power has not been earned, it has been given to him or her by the other. Absolute power corrupts absolutely, and so it is with Over-Respect.

For example, the stereotypical situation of a man who idolizes a woman, who in turn treats him poorly (contemptuously) really does happen. And so does, the stereotypical woman who lives in fear that if she speaks her mind to any man, he will physically attack her. The men she submits to, in return, feel Contempt for her obvious fear. Just as the Man may justify his adoration with rationalizations and excuses, so may the Woman justify her fear with the explanation that all men are dangerous.

Since Contempt is an emotion. Its creation is not always logical. But it is common for people to not value what is not earned. When Respect is given too freely, it loses its value. When you feel that people are afraid of you for no reason, you tend to not Respect them.

Over-Respect is in the eye of the Beholder(s). Some people may regard themselves as deserving of so much Respect that Over-Respect is rarely created. But some see being Over-Respected as a sign of weakness in the other person.  This perception of weakness turns into Under-Respect which may turn into future Violations.