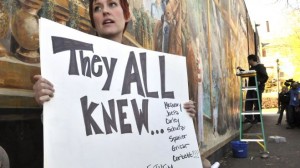 “The word cunt is not necessarily derogatory”
Those were the words of then-CU President Betsy Hoffman during the CU Boulder football rape ‘scandal’ in 2004.
I have to ask “How much money must be involved for a woman to make such a statement during a press conference?”  I ask because myself and everyone I know, all agree it’s nothing but a derogatory term. (Oh and BTW, within a few months Hoffman herself would step down over a scandal regarding funding.)
But let’s look at both big money and protecting an institution’s access to that money.
DU Boulder was well known as one of the biggest ‘farms’ for the NFL. An allegation of rape was brought against a football player during a ‘recruitment party.’ Then the woman started raising cain about being pressured by the university/athletic department to ‘let it go.’ That’s when things really got ugly for ye olde athletic department. Nine other women came forward and admitted they too had been sexually assaulted — and the incidents were not only swept under the carpet, but they’d been pressured too. These incidents predated the 2004 incident.
Under siege, CU coach Gary Barnett was walking down the hallway from a press conference with an aid. Unbeknownst to him there was a reporter around the corner; who heard them approaching.  Hitting the button, the reporter recorded Barnett saying “This cunt just won’t go away.”  That naturally hit the airwaves. Not a good day  for the ol’ alma mater.
In an attempt at damage control, President Hoffman held a another press conference. That’s when she told the media it’s not necessarily a derogatory term. (Later in a deposition, she dug herself even deeper by calling it a ‘term of endearment’)
That particular incident gave us a peek at a systematic and ingrained pattern of behavior aimed at protecting both the football program and the institution. A behavior we’re seeing again at Penn State.
There is a LOT of money involved in athletic programs. As the 2004 rape scandal demonstrates, there is a long-established precedence for protecting these programs. The key point to this is how the system had developed to handle obviously illegal activities ‘in house’ to protect the university’s cash cow. This with the — at least tacit — approval of the university itself. (You can’t get something that big, involving that much money, that far out of whack without it being known in the hallways of power.)
That brings us to Penn State. As Yogi Berra once said “This is like deja vu all over again.”
First, PS is another a well known farm for the NFL.
Second,  Mike McQueary is claiming he did report the incident to the police — the university police.
http://www.centredaily.com/2011/11/16/2988120/i-did-stop-it-talk-with-police.html
Except, well doesn’t that strike anyone else as a little ‘in-house?’ I mean jurisdiction aside, where does the campus police department’s funding come from?
Third, this is a situation that is so obscene there is no way to either sweep it under the carpet or justify the organization protecting itself by handling it in-house. Business as usual has — again — crossed the line.
Yet, here is the board of trustees firing people left and right for doing business as usual.
That’s where I kind of stumble over this issue. ‘Business,’ not only for athletic departments, but a business universities across the nation engage in.  That’s because the money athletic programs generate is a large chunk of universities’ budgets.  This includes both direct and indirect income (and ‘benefits).*
But let’s stay focused on the university. Personally I’m curious how many rolling heads it will take for the board to distance themselves from the problem. Can they fire enough people to make it look like they weren’t part of this ‘protect the program’ culture? Will the media/people keep after them?Or will something else come up and we’ll get distracted, allowing business as usual to creep back in?
It’s going to be interesting to see how far this goes.
But more important than all of that, I want to ask you about our own moral compass. Have we as a society gotten so conditioned to accepting the pursuit of money and monolithic institutions, that we turn a blind eye?  Have we been conditioned to go along with it?
Both of these examples are situations where institutions suppressed information about crimes in order to protect a lucrative cash cow program. I’m not talking about skimming, embezzlement, dirty deals or minor peccadillos. I’m talking sexual assaults.
For the record, I’m not screaming for an agenda about women’s rights, rape awareness  or protect the children here (Unfortunately those have become their own form of big business). Nor am I bemoaning the evils of the capitalist system and how we should all be happy, nappy headed socialists.
What I am curious about is have we become so conditioned to playing inside the rules of the organizations that we’ve lost sight of other important aspects? What have we gotten to the point of accepting?
I can’t speak for anybody else, but if I were to see a 10 year old boy being sodomized in a university shower there would be physical assault — then the police would be called. “But, but … he’s a high ranking coach!” So? You could lose your job! It would be a scandal! The program would be threatened!
Again. So?

But I have to admit, I’m not a team player. I’m especially not a team player if that means shutting off my own morals and turning a blind eye to crime in order to protect the ‘team.’  But how many people are? What else has been swept under the carpet over the years? All in pursuit of protecting the program.

Perhaps the biggest scandal of the Penn State affair is how protecting a financially lucrative program really is business as usual. That it takes a case involving decades of child molestation that we even notice anything is wrong.