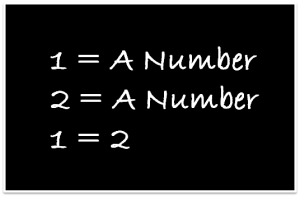 Yep… I got called privileged again.

Or to be more specific I was told I ‘don’t believe in privilege.’ In responding I came across some points of interest and considerations — especially light of some of the arguments that have been going on over the stuff I post:

I have a saying, “Truth is not proprietary. It is not owned by one system or group. If something is true you’ll be able to see manifestations and variations everywhere.”

Avoiding the paranoia trap * and allowing for how different paradigms will influence our perceptions, (Name withheld)  is correct, I do not ‘believe in’ privilege.

Mostly because, I make a distinction between belief — something incredibly important for humans (as in it’s arguable that we’re wired for belief) — and accurate assessment and analysis of how things work.

The last especially means analysis of systems that have many wibbly wobbly, timey wimey parts, influences, variables and bits and bobs — including belief as a factor. Which allows me to defend religion, ideology, magic and use science and critical thinking at the same time. Our brains are beautiful things: we can contain all of those and more in ye olde gray cells. And nobody is entirely right or entirely wrong about belief or analysis.

I’ve had people try to explain privilege to me. I mean I’ve sat down and listened and tried to understand. I don’t see it everywhere as described. Nor do I see parts or variations that aren’t better ascribed to other factors.Consistently I have found ‘privilege’ meets the criteria of a belief system. Again a VERY important aspect of the human psyche. Condemning someone for their belief system while being firmly entrenched in ones own has led to many a war and atrocities. (Which is why I find it so important to distinguish between the two.) At the same time, to those who believe in something, it seems so self-evident that those who can’t see it must be morons.

While ‘privilege’ is a strong belief in certain circles, I find it a very weak and unsupportable social hypothesis. That’s because it appears to track this way

Anyone familiar with basic logic recognize the fundamental flaw there, it should read

Notice the word ‘if.’ It’s kinda important. This second version can serve as the basis of the conclusion of privilege, but stepping out of logic, you run in other standards –including having to prove A=B. That’s where things get wibbly wobbly, because A could be 1,2,3,4,B,B1,B2 …

This is not to say there’s no validity to the idea or the component parts regarding privilege. But you have to take a very specific path (A= ) through many variables to get to A = E = privilege. ‘If’ is a mighty big word and when we drop it, we’re no longer in analysis, but moving into belief.  More than that we’re using faux-logic to  protect and/or justify a belief and ensuing behaviors. And by that I mean people are trying to rationalized and reverse engineer a ‘logical argument’ to

1) protect themselves from external criticism

3) excuse themselves from not acting

4) justify why what they are doing/did is ‘right’

5) attack the beliefs of others

In Firefly Malcolm Reynolds said “Ain’t nothing worse than a monster who thinks he’s right with God.” You can apply that  saying to those five points in oh so many ways. That’s a big danger of beliefs — especially when we mistake them for truth, how the world is and how/what needs to be changed. Belief is often used as the justification to attack others; for example screaming privilege at the drop of a hat.

At the same time, belief can be truly inspirational, comforting, life affirming, life organizing and used for great things. Which is why you CAN’T discount it. Abusus non tollit usum (roughly: Abuse doesn’t argue  against use).

Also at the same time it’s why I so want to slap the shit out of people who have weaponized critical analysis to attack the beliefs of others without applying the same to their own belief systems.  This especially those who claim their beliefs aren’t beliefs, but the result of critical thinking. Sorry Precious, if you’re going to hammer-tack other people’s tender bits to the table, yours go onto the table as well  — and everyone at the table has a hammer-tacker too.

3) Verbally attacking the person, (not addressing the topic)

4) Trying to label the person (you’re a liberal/conservative)

6) Pulling an “Elvis has left the Building!”

7) Have to resort to — often obscure  –works/references to support your point — instead of being able to explain it to people in a way that they say ‘oh yeah, I know what you’re talking about’ or “Ya know, my aunt Martha does that.”

8) Using I and you in most of your statements

9) Wanting to punish, hurt, belittle and tear down the other person.

11) Using a catch phrase (e.g. privilege, racism, liberal/conservative) to do any and all of the above

You’re operating from belief, not critical analysis. More than that your belief,  while it strongly influences your internal subjective reality does not necessarily reflect the whole complexity of what is going on in a situation, much less the whole wide world. And yet, it is protecting our beliefs, our own internal reality, that we end up fighting the hardest to protect.

I often quote a US general who shut down the squabbling in his intelligence department (“We’re right!” “No! We’re right!” Ungh uh! We’re right!” at the cost of American lives and hundreds of thousands of dollars) by setting three basic standards

First tell me what you know

Second tell me what you DON’T know

Then — and only then — tell me what you think.

Start with replacing ‘think’ with believe. Then you’ll realize how many people completely miss the second step and blur steps one and three into a unified A =E. Then and here’s where the fights start, tie in their self-esteem and self-identity with their beliefs and feel that anyone who questions any part is personally attacking them.

If you start applying know/don’t know criteria to what ~cough cough~ ‘know,’ you’ll quickly run into how many things you think you know are actually beliefs. Once you know that about yourself, it’s funny how you cut other people some slack for doing the same thing. You can find yourself actually sitting down and asking questions instead of fighting.

To say nothing about not embarrassing yourself in public. This by — when someone pulls out their belief and wags it in your face — not having to pull yours out and wave it right back for everyone else to see. Usually resulting in everyone else rolling their eyes about two people in a belief wagging contest.

*Albert Bernstein in “Emotional Vampires” took the DSM-IV personality disorders and translated them into layman’s terms (He also does a great job of including boundary setting with each). Paraphrasing his observation about this disorder, it’s a matter of oversimplification. Everything in life is about this ‘one thing’ therefore the person sees it everywhere and in everything.