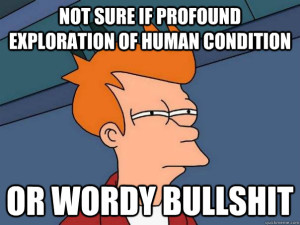 There’s an old saw about every story having two sides. My wife — an ex journalist– scoffs at that idea and replies, “Two? You’re lucky if there’s only 16!” I tell you that because anytime someone claims to understand the ‘real motivations’ of something my bullshit detectors start flashing and sounding off.I have a term ‘puddle profundaties.’ Basically that’s when someone makes a thunderous and resounding proclamation about what is the sole cause/motivation/truth about something. It sounds so deep, so convincing, so profound, so univeral, so informed and the person sounds so convinced of him/herself ‘s it’s as if God is standing behind that person and has given what he/she is saying the sacred ‘All Mighty’s Seal of Approval.’But if you know the subject, much less anything about people or start questioning the idea, it turn out to be about as deep and profound as a puddle in a parking lot. “All rape is about power and control!” “The roots of violence are poverty and lack of education!” “Violence is an expression of our hatred, self-loathing and lust for vengeance.”Ummm no. And while we’re at it Mr Hedges, you’re kind of like a virgin proclaiming you know everything there is to know about sex because you watch a lot of porn. The only people who will be impressed are other virgins. Violence happens for a lot of reasons. Starting with the fact that while emotional and self-esteem issues are a common reason for violence, they are not exclusively why it happens. I don’t kill that rabbit to eat it because I need therapy. I need food.Hunter S Thompson wrote “Fear and Loathing: The Hells Angels” after riding with them for over a year (and even getting his ass kicked by them). Mr. Hedge’s writing here looks like he spent a lot of time on Lexus Nexus searching for what academics and other authors wrote about violence. And instead of actually talking with the people he’s sharing his deep wisdom about he listened to a lot of people with social agendas.