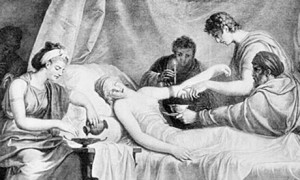 What is the lifeblood of a prosperous society? Is it money, natural resources, education, or is it something else? A prosperous society does not have to be a wealthy society, but it could be. A prosperous society is one in which its members live happy and productive lives, free of fear, devoid of prejudice, and without the constant blaming of other races, groups, genders, etc. for society’s problems.

The presence of money, natural resources, and education does not guarantee any of the above. What does guarantee it is an ample amount of societal respect. Respect is the lifeblood of society in that it is the foundation of trust, commerce, cooperation, and civic duty. Respect can also be viewed as the lubricant that allows the different aspects of society to function smoothly without friction. It is not necessary for people to like each other, but it is necessary that people respect each other.

On the other hand, the presence of Disrespect, serves to withdraw Respect from society. Disrespect creates bias, prejudice, blaming, fear of others, blaming of others, and the dehumanization (othering) of different members of society.

It takes the giving of Respect to receive Respect. Those that respect others are more likely to be respected in turn. Those that treat others with respect are more likely to be respected by others. This is a fact of human nature. Try it for yourself if you doubt it. Randomly treat ten people disrespectfully by making assumptions about them, their group, race, or gender. Blame them and accuse them of being the source of a societal wrong. Then count the ones that subsequently respect you.

Now do the reverse. Randomly treat ten people with empathy and kindness. Make no assumptions about them. Treat them as individuals, not members of a group, race, or gender. Give them the benefit of doubt. How do they respond? Are they more or less likely to cooperate with you, to listen to what you have to say? In which case did you create Respect? In which case did you destroy it by creating Disrespect?

Now take a look at the actions and behaviors of many of the activists who claim to be trying to correct the wrongs of society. Take a look at what they actually do as opposed to what they claim to stand for. For many of them, much of their complaints revolve around the central issue of not receiving enough Respect. They feel disrespected due to being a member of a certain group, race, or gender.

As a result of feeling and being disrespected, they want society to respect them more. Some activists will focus on their own and their Group’s empowerment. They have Respect for themselves and for others. Their goal is to create more Respect for themselves and their Group, which transfers to more societal Respect, which in turn reflects back to them. Their actions serve increase the lifeblood of society and promote its well being.

Then there are the Toxic Activists. These Activists do not create Respect. They take it away. They focus on blaming other groups, races, and genders for their mistreatment. They use blaming as their primary weapon of choice. They create fear and distrust in society. They are not respectful in their characterization of those that oppose or disagree with them. They thrive on bias, prejudice, and othering as a means to recruit supporters to their cause. In fact, the more chronically dissatisfied, the more effective the Toxic Advocate is at spreading his or her message of Disrespect.

For Toxic Advocates, the ends justifies the means. They live in a world of real and perceived Disrespect. They don’t know how to create and give Respect, and consequently don’t receive it in return. Toxic Advocates claim to want “dialog” when in reality they shout, scream, and try to silence anyone that disagrees with their viewpoint and ideology.

When an advocate is trying to promote his or her message to you. Do this simple test. Ask yourself, does this person and associated cause create more Respect in society by its actions? Or does he or she rely on blame, accusations, bias, and prejudice to build Disrespect for his or her opposition? If he or she does the later, you are in the presence of a Toxic Advocate who is draining the lifeblood of society. Extreme caution is advised.