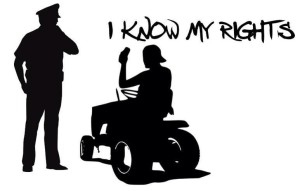 Take a tiger and shave it. (I suggest you sedate it first.) You will see pigmentation patterns in the animal’s skin consistent with its stripes. Take a bird and between feathers, muscles and bones you will consistently see its wings. These traits are inherent in the animal’s physical make up and are visible.

However, if you strip a human being down you will not see ‘rights.’ Not spelled out in the pigmentation on the skin. Not etched into the bones. Rights are not written out in our DNA like the states names on the five dollar bill (in the Lincoln Memorial.)

Human rights have no physical existence. They are a concept; an idea with no physical evidence for support. There is no proof, no scientific test, no physical manifestation, no mathematical formula that they exist.

Rights are a social construct. An agreed upon convention (in certain cultures) that allow people to co-exist in this modern world. In short, rights are a set of beliefs.

I mention this lack of physical evidence because I have often heard it contended that rights are unquestionable, unshakable and untouchable because they come from God. I’ve heard it argued with equal fanaticism that just by being human we’re born with them. (Humanism replacing God as the ultimate source.) This is the “Natural Rights” argument. Another source is a weird blend of both those absolute convictions plus an appeal to authority; that’s the founding fathers said so. (“We hold these truths to be self-evident, that all men are created equal, that they are endowed by their Creator with certain unalienable Rights …” It’s in the Constitution, doncha know?)

With this approach — no matter what the ascribed ultimate source — rights are unquestionable, unshakable and untouchable.

Something with all those ‘uns’ may seem unsinkable as well.

Before I go on, and for the record, rights are a belief that I heartily agree with and support. But that does not mean I forget they are a social construct — specifically arising from modern western philosophy.  It just so happens rights are integral to a free society. Another social and philosophical ‘construct’ I’m rather fond of and happen to believe in.*

But the pragmatist in me says there’s an important distinction to be made between physical existence and philosophy, cultural standards and beliefs. So while I believe in rights, that’s also where I begin to have problems.  See, being a pragmatist, I have to consider other issues. (Like how do we get the food out of the ground and to the people in the cities? And what happens if that chain of logistics breaks down?) These are things that people tend to take for granted. I don’t.

That’s another reason I get twitchy about ‘inalienable rights.’ I recognize that a concern over rights assumes the presence of life’s necessities (e.g., food, portable water, services). Having been in circumstances where those weren’t guaranteed, I can assure you the struggle for them takes precedence over rights.

In other words, the argument over rights is very much a first world problem**. Between that and being both a history major and techno-fan I’ve learned an important concept: Society is not unsinkable.

But if you think something is unsinkable, then often there is a resulting, “I can change things until I get what I want” attitude

Rights, freedoms and requirements are a very complex balancing act for everyone. I’ve looked into the subject of rights. I can assure you, it’s a lot more complicated than you think. Starting with the divisions between federal, state and individual rights.  (For example did you know it was the Anti-Federalist faction that demanded the Bill of Rights — guaranteeing individual and state rights  — be included into the Constitution?)

Despite the pop-culture interpretation that the Civil War was about racism, do you understand the tensions between Federal Power and State’s rights that existed — even up until the Civil Rights Act of 1964? Do you know the difference between infringement on your free speech and where your perceived free speech infringes on the rights of others?

When you understand the ‘ship is sinkable,’ you always keep these kinds of things in mind.

Whereas believing there is no way the ship could be scuttled, there is no reason to compromise in your position and demands regarding YOUR rights. (Or the rights of your chosen group.) You can get what you want with no ill effect. Or if there is a negative effect, it’s someone else’s problem. This is one of the inherent problems of many people’s current interpretation of rights. In the pursuit of their rights, they transgress on the rights of others. In their pursuit of their ideal ‘free society,’ they attempt to impose tyranny on others.

And why shouldn’t they? God is on their side — whether that is a religious god or secular ideology bordering on zealotry.

A free society is not unsinkable. It can be destroyed. It can be turned into a tyranny by the constant demand for the incursion on the rights of others. Rights that, as social constructs, can be eroded by those who feel morally justified in taking them from you. (Again, this sanctimonious self-appointed, moral superiority can come from religious or secular sources.) The irony of this is how many zealots are absolutely convinced they are fighting for freedom and rights.

See that’s the problem with ideas with no physical existence. It’s really easy to twist the definition into whatever it means to you and your group. Then try to force that onto society at large.

This especially becomes a problem when someone exclusively judges everything from a moralistic or idealistic perspective. Everything in life is about whatever the person has obsessed on (rights, sexism, racism, religion). This is of particular interest because one of the clinical standards of paranoid personality disorder is this kind of oversimplification. Nothing else is as important. At the same time, this kind of person comes across with complete conviction and confidence about their beliefs. They know this is the ultimate truth. There is nothing else of equal importance. Knowing this, you can begin to spot such true believers by how fast they dismiss other considerations — like expenses and the rights of others.

Just remember folks, the ship isn’t unsinkable.  If you want a free society, the preservation of rights has to be fought for. But at the same time, there are other considerations and services that must be maintained. While most of us are trying to just get by, it’s time to look up and see the damage the zealots are causing — especially to your rights in the pursuit of theirs.

*The quotes around the word construct are because it’s commonly used as a dismissive in some circles. (“Social roles are made up constructs. So we don’t have to follow them, neener, neener, neener!”). Having said that, the core contention that many behaviors and ideas are social conventions is technically correct. They just have a track record of working.

** Where things get really silly is the argument over positive and negative rights — especially when it comes to technology.  Stop and think about “People have the right to clean water.”  There are all kinds of assumptions behind that statement.