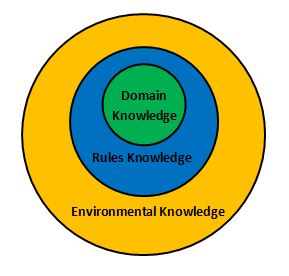 Google the term “self defense” and there almost 10 million results. Millions of people expounding on different ideas of what constitutes self-defense. Google “self-defense competency” and the results drop down to a couple thousand.

What does it mean to be competent in self defense? It doesn’t mean that you are safe. You could safely lock yourself in your fortress-like home and still be incompetent in self-defense.

Self defense competency is described in many ways by different people. I define it as a competency in three separate, but inter-related and inter-dependent elements of Environmental Knowledge, Rule Knowledge, and Domain Knowledge.  Where:

Despite being the foundation of Self-Defense Competency, Environmental Knowledge frequently is assumed to be common knowledge. It is viewed as simply occurrences of Bad Guys assaulting Good Guys in some manner. Environmental Knowledge is also separate from “situational awareness”. It is not enough to simply be aware, you need to know what you are looking for, and what to be aware of.